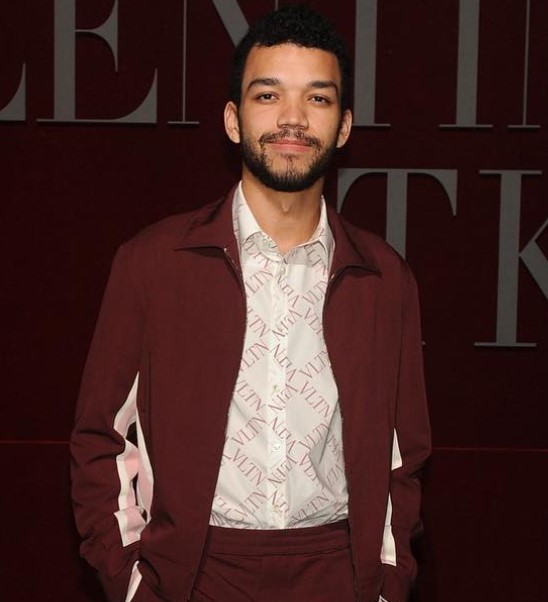 Justice Smith is an American actor who is best known for his performance as Franklin Webb in a science fiction film, “Jurassic World: Fallen Kingdom”(2018) and as Tim Goodman in mystery film, “Detective Pikachu”(2019). Smith also had a starring role in the Netflix TV series “The Get Down” and also a recurring role in the Nickelodeon series, “The Thundermans”.

Smith even advocated for queer and trans inclusion in the Black Lives Matter movement 2020 after George Floyd was brutally killed, and also came out publicly as queer in an Instagram post on June 5, 2020. Besides, Smith is quite active in social media sites with over 384k followers on his Instagram: @standup4justice.

What is Justice Smith Famous for?

Where was Justice Smith Born?

Justice Smith was born on August 9, 1995, in Los Angeles, California, United States. His birth name is Justice Elio Smith. His nationality is American. Smith belongs to mixed(African-American-European) ethnicity while Leo is his zodiac sign.

Justice was born to a family with a music background to Wayne Smith(father) and Duilia Setacci(mother). His father is African-American and his mother is of European descent. Born to a singer couple, Smith grew up learning singing along with his 7 siblings: 3 brothers, Wayne Smith Jr., Mark Cruz Smith, and Richard Smith, and 4 sisters, Victoria, Camero, Felicia, and Adrienne.

Smith attended the Orange County School of the Arts in his hometown and eventually got graduated in Master’s in art in 2013. Before, he performed in shows around Orange County and was ranked among the top one percent of young artists in the US, when he was in his senior year of high school. He was also nominated for the U.S. Presidential Scholar of the Arts.

Despite being talented in music, he wanted to pursue a career in film, eventually, he made his first appearance in a kindergarten play named “Three Billy Goats Gruff”. Smith even appeared in the Apple commercial at the age of 15 as well.

What Does Justice Smith Do For Living?

Who is Justice Smith Dating?

Justice Smith is a charming man who recently came out as queer in an Instagram post on June 5, 2020, during the protest for justice of death of George Floyd. Smith fully supported the Black Lives Matter movement 2020, during which he even confirmed about being in a relationship with actor Nicholas L. Ashe. Nicholas is an actor and writer, known for Queen Sugar(2016), Last Looks(2017) and Custody(2016).

Previously, it was reported that Smith was dating a girl named Raffaella after they were clicked together during their vacation in 2017. They were spotted together at an event as well.

What is the Net Worth of Justice Smith?

Justice Smith has quite good earings from his professional career as an actor. Working in this field for over 7 years, Smith has managed to earn a healthy fortune from his several hit movies and series. His net worth is estimated to be around $1 million.

How Tall is Justice Smith?

Justice Smith is a good-looking man in his 20s. With his delicate smile and properly maintained athletic body physique, Smith has managed to earn several hearts all over the world. He stands tall with a height of 5ft. 10inches(1.78m) while his body weighs around 64kg(114 lbs).He has a brown complexion with black hair and dark brown eyes.

Our contents are created by fans, if you have any problems of Justice Smith Net Worth, Salary, Relationship Status, Married Date, Age, Height, Ethnicity, Nationality, Weight, mail us at [email protected]