Justin Rose is a famous English professional golfer who currently plays on the PGA Tour and has membership in the European Tour. 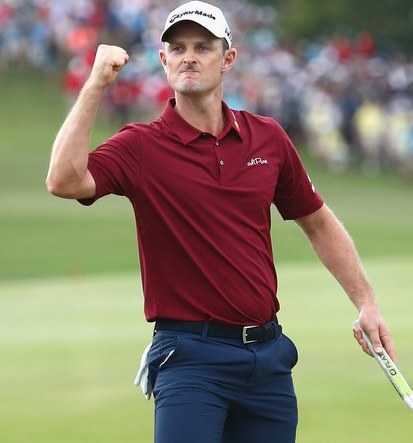 Justin Rose is a famous English professional golfer who currently plays on the PGA Tour and has membership in the European Tour. He won a gold medal at the 2016 Summer Olympics in Rio.

What is Justin Rose famous for?

When was Justin Rose born?

Justin Rose was born on 3oth July 1980 in Johannesburg, South Africa. His birth name is Justin Peter Rose. British is his nationality. His ethnicity is White. Leo is his zodiac sign.

He was born in the White ethics family to Ken Rose(father) and Annie Rose(mother). His father Ken died of cancer in 2003.  He has two other siblings: a brother Brandon Harcus and a sister called Margi North.

When Justin was 5 years old, his family migrated to England where he played golf regularly at Tylney Park Golf Club. At the age of 17, Rose competed in the Walker Cup.  He became known internationally at the 17, in the 1998 Open Championship.

How is Justin Rose’s Career?

– Justin Rose started his professional career as a golfer when he was picked by the European Tour. He finished in the top-40 on the order of Merit.

– In 2002, he won his first professional event, the “Dunhill Championship” in South Africa, “Nashua Masters”, Crown Tournament on the Japanese Tour, and “Victor Chandler British Masters” in the same year.

– In 2003, Rose reached number 33 in the Official World Golf Ranking. He claimed his PGA tour card in the same year.

– In 2005, he quit the European Tour and focused more on the PGA Tour. However, he started to lose his position in the World’s top 100.

– Rose again joined the European Tour in August 2005 and got his best performance of the year in the Buick Championship.

– In 2006, Rose claimed his first title in four years, the “Australian Open”.

– He also finished in the top 5 in the 2007 Masters. He emerged third at the 2010 Honda Classic and then went on to win the Memorial Tournament.

– In 2011, Rose claimed the BMW Championship, his first title of the Year and his third PGA title success.

– He gained his first World Golf Championship title in 2012, the “WGC-Cadillac Championship” which let him rise in the rank of top 10 again. He also won the Turkish Airlines World Golf Final(2012).

– In 2013, Rose won his first major title, the US Open, making him the first Englishman in 43 years to claim the title thus ranking him to the no.3 spot.

– He won the Quicken Loans National Zurich Classic of New Orleans in 2014, and the UBS Hong Kong Open title in October 2015 that marked his Eighth European title.

– Rose was awarded the gold medal in the 2016 Olympics. Rose also claimed the 2016 Open Championship and qualified Team Europe to the 2016 Ryder Cup.

– In his 2017 campaign, he claimed his second World Golf Championship title, WGC-HSBC Champions, as well as the Turkish Airline Open also Fort Worth Invitational in May 2018.

– Rose moved back to World Number 1 in January 2019 and also won the Farmers Insurance Open at Torrey Pines Golf Course.

– On 16 June 2019, Rose finished tied for 3rd at the U.S. Open at Pebble Beach Golf Links in Pebble Beach, California

Who is Justin Rose married to?

The famous golfer, Justin Rose is married to Kate Philips, a former gymnast. The couple got married in December 2006.

The couple is blessed with two adorable kids: Leo Rose(2009) and Charlotte Rose/Lottie(2012).

What is the net worth of Justin Rose?

How tall is Justin Rose?

The golfer, Rose has a well maintained athletic body build. He stands tall with a height of 6ft. 2in. (1.88m). He has a bodyweight of 82kg(181lbs). He has a fair complexion with brown eyes and brown hair.

Our contents are created by fans, if you have any problems of Justin Rose Net Worth, Salary, Relationship Status, Married Date, Age, Height, Ethnicity, Nationality, Weight, mail us at [email protected]