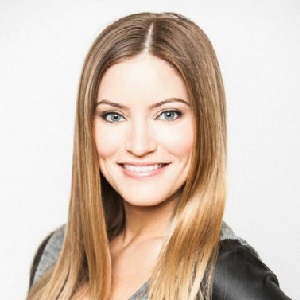 Justine Ezarik AKA iJustine is an American Youtuber, actress, and social media personality. She is also a host and a famous web life caster. Ezarik is famous for her Youtube channel titled, iJustine and her life as a lifecasting star.

How old is Justine Ezarik?

Justine Ezarik was born on March 20, 1984, in Pittsburgh, Pennsylvania, USA. As of 2020, her age is 36. She was born to parents Steven Ezarik (father) and Michelle Ezarik (mother). Her mother, Michelle is a physical education teacher and her father, Steven is a coal miner.

Talking about her educational background, she studied at Bentworth High School, Southwestern Pennsylvania. In 2004, she graduated from the Pittsburgh Technical Institute, Oakdale, United States.

How is Justine Ezarik Pursue her Career?

After graduating from college, she started video editing and graphic design jobs. In December 2006, she participated in the Yahoo! talent Show, where she made it to the top five finalists.

Later, she begins to appear on Justin.tv, which is a lifecasting website. She enjoys sharing her day to day social experience in that platform. She started to gain famed being on this show. Many fans and followers loved her content.

Justine Ezarik started her acting career in 2009 with several short and noticeable roles in different TV Series such as The Station, Law & Order, Totally Sketch.

She is part of the American comedy web series, The Annoying Orange and Ask Orange. Ezarik also had recurring roles in these series and worked as a voice artist. She was involved in about 8 years in both of these projects.

From 2016 to 2019, she appeared in the adventure, fantasy game-show, Escape the Night. Her upcoming project title, A Fairy Tale After All, fantasy series will be coming soon.

Ezarik opened her Youtube channel titled, iJustine, on May 6, 2006. She uploaded different kinds of videos such as Tech videos, cooking, vlogs, etc in her channel. Her channel has 6.5 million subscribers and has accumulated over a billion views.

How tall is Justine Ezarik?

Justine is 5 feet 2 inches tall and weighs around 55 kg. She has hazel eyes and blond hair.

How much is Justine Ezarik worth?

Justine Ezarik’s net worth is approximately $2 million as of 2020. She has not revealed her exact annual salary. However, on average, an actress earns an average salary of around $56 k. As a YouTuber, her estimated average earning is in the region of $6.4k to $102.2 k.

Who is Justine Ezarik dating?

Currently, she is single and not dating anyone. In 2012, she was dating, Ryan Wyatt, who is head of Youtube content. However, they split up in 2015.

Prior to that, there were rumors that she was dating Justin Fisher and Brian Pokorny. But, there is not any strong proof about dating.

Our contents are created by fans, if you have any problems of Justine Ezarik (iJustine) Net Worth, Salary, Relationship Status, Married Date, Age, Height, Ethnicity, Nationality, Weight, mail us at [email protected]