Karim Benzema is a professional football player who plays for Spanish club Real Madrid and the France national team. 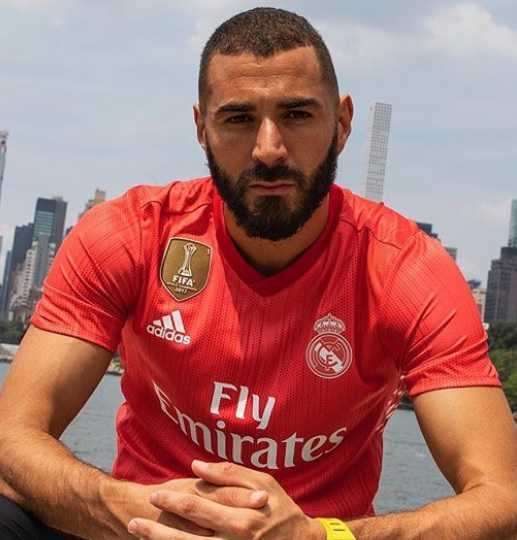 Karim Mostafa Benzema, popularly known as Karim Benzema is a professional football player who plays for Spanish club Real Madrid and the France national team. His plays in the striker position. His shirt number is 9. He has proved himself as a prolific goal scorer and is described as an immensely talented goal scorer inside the box. He started his professional football career from Lyon in 2004. Real Madrid signed rising striker Benzema in July 2009 for 35 million Euro. He has won four Ligue 1 titles, 1 Coupe de France, and 2 Trophee des Champions with Lyon. He has won 2 La Liga titles along with four UEFA Champions League, 2 Copa del Rey, 2 Supercopa de Espana, 3 UEFA Super Cup, and 3 FIFA Club World Cup titles with Real Madrid.

Initially, he has represented France national team at different age levels before making senior international debut in 2007. He played for France U17 team that won the 2004 UEFA European U17 Championship. He has represented France senior team in the 2008 and 2012 Euro Cup and in the 2014 FIFA World Cup. However, Benzema has been kept out of the France squad at 2016 Euro and 2018 World Cup following the alleged scandal and tactical reasons.

He is the three times French Player of the Year and has received Bravo Award in 2008.

Karim Benzema was born on 19 December 1987. His birthplace is Lyon, France. His nationality is French. He is the son of Hafid Benzema and Wahida Djebbara. His grandfather Da Lakehal Benzema migrated from Algeria to France in the 1950s. He practices Muslim religion. He has three brothers named Farid, Sabri, and Gressy, and five sisters named Laeticia, Lydia, Sofia, Celia, and Nafissa. At the age of eight, he started training football at local club Bron Terraillon SC. His performance caught an eye of Lyon. Benzema then joined Lyons academy in 1996.

Benzema was promoted to the senior team in 2004. He started his early career on the bench. He did not get much playing time. Once he started proving himself, Benzema went on impressing the club and their fans. At Lyon, he won four consecutive Ligue 1 titles becoming the top scorer in 2007-08. He also won Coupe de France in the 2007-08 season and Trophee des Champions in 2006 and 2007.

Spanish club Real Madrid signed Benzema on a six-year deal for 35 million Euro in July 2009. He was presented in a grand way, Real Madrid presented Kaka and Cristiano Ronaldo at the Santiago Bernabeu Stadium. He made his La Liga debut in August 2009 against Deportivo La Coruna and scored his first competitive goal for the club against Xerez in September 2009. Benzema struggled for starting XI in his early season at the club. He holds the record of fastest goal in an El Clasico history scoring 21-seconds goal against rivals Barcelona on 10 December 2011.

Initially, Benzema has represented France at different age levels including France U17, U18, U19, and U21 teams. He was the member of the France U17 squad that won UEFA European U17 Football Championship in 2004. He made his senior debut for France national team against Austria in March 2007 and scored his first senior goal in his debut game. He has represented France in the 2008 and 2012 Euro Cups and in the 2014 FIFA World Cup. Benzema was excluded from France national team in the 2010 World Cup, 2016 Euro Cup, and 2018 World Cup squad for alleged reasons and scandals.

Karim Benzema stands 1.85 m tall i.e six feet one inch. He has a body weight of 81 kg. In 2011 ahead of the 2011-12 season, Benzema went to Italy to attend a high-performance clinic to undergo treatment to reduce his weight. He reduced 8 kg of his total weight. He has a balanced body and maintained himself perfectly fit.

Karim Benzema is in the relationship with Cora Gauthier since 2016. The couple lives together and has two children named Ibrahim and Melia. Previously, Karim Benzema was linked with Manon Marsault, Analicia Chaves and singer Rihanna.

Karim Benzema has been dragged into several controversies and scandals. Karim Benzema along with Franck Ribery, Sidney Govou, and Hatem Ben Arfa was charged with solicitation of a minor prostitute in 2010. The scandal cost Benzema a place in France national team for the 2010 World Cup. In 2014, the case was dropped against both Ribery and Benzema saying there was insufficient evidence to prove that the pair knew the prostitutes were underage.

In 2015, Benzema was arrested by French police for his alleged part in blackmailing fellow French player Mathieu Valbuena. Benzema was criticized by top-level authorities of France including then Prime Minister of France, Manuel Valls. Benzema has not made French squad since then.

Net Worth of Karim Benzema

As of 2018, the net worth of Karim Benzema is estimated around $40 million. He has an annual salary of $8 million. He was once the highest paid footballers in France in 2008, while he was playing for Lyon. He was transferred to Real Madrid in 2009 for 35 million Euro.

Our contents are created by fans, if you have any problems of Karim Benzema Net Worth, Salary, Relationship Status, Married Date, Age, Height, Ethnicity, Nationality, Weight, mail us at [email protected]