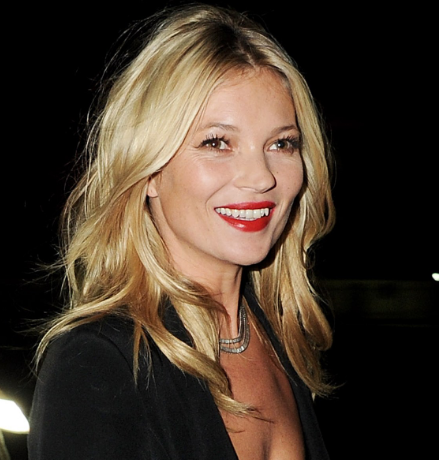 Kate Moss is an English supermodel who was well known for her waif-like physique as well as her high-profile advertising campaigns and highly publicized relationships.

She was faced with drug allegations which led to her being dropped from fashion campaigns but was later cleared of all charges and resumed back her modeling career.

Kate Moss was born in Croydon, London, the UK as a Katherine Ann Moss to mother Linda Rosina and father Peter Edward Moss. Her father is a travel agent and her mother is a barmaid. Her parents separated when she was 13. She has a brother named Nick Moss. She takes English nationality.

Talking about her education, she attended Ridgeway Primary School and then Riddlesdown High School. Although she was good at sports, she struggled with academic work, receiving one C in Science GCSE, but only achieving D’s and F’s in all other subjects. Kate Moss is an English supermodel who was well known for her waif-like physique as well as her high-profile advertising campaigns and highly publicized relationships.

The career of Kate Moss

Moving towards her career, Kate Moss was discovered at JFK airport in New York when she was fourteen. She rose to fame in 1993 when she appeared in an ad campaign for Calvin Klein and her waif-like beauty was dubbed “heroin chic.” She has had a long and successful career, gracing the cover of British Vogue 30 times and appearing in ad campaigns for brands including Rimmel London, Burberry, Chanel, Dior, and Louis Vuitton.

In September 2005, photographs emerged of her snorting cocaine. She issued a full apology and checked into rehab. She went onto design a best-selling fashion line for TopShop and, in 2010, she designed a range of handbags for Longchamp.

Net Worth of Kate Moss

Moving towards her income, she has an estimated net worth of £ 45 Million. But her salary was not disclosed yet. He earns as a model and a fashion designer.

Kate has had high profile relationships with Johnny Depp and Pete Doherty. She has a daughter named Lila Grace Moss who was born on 29th September 2002 with her former boyfriend, magazine editor Jefferson Hack. She started dating Jamie Hince in 2007 and they got engaged in early 2011.

They married on 1st July 2011 at St Peter’s Church, Southrop in Gloucestershire. Later, The couple split in 2015 and settled their divorce out of court in 2016. At present, she was probably single. In fact, Kate is known for her “relationship – junkie” status.

Apart from that she has given her support to various other charity organizations like the Elton John AIDS Foundation, Make Poverty History, Comic Relief and Homes of Hope, the Hoping Foundation, and the Lucie Blackman Trust.

Being a model, she has a good figure. Her bust is size 34 inches, with her waist being 26 inches. Coming down her hips, she is size 35 inches. All these weigh about 55kg or 121lbs standing at 5 feet 7 inches. Kate wears a dress size of US size 4 or EU size 34. Her shoes are normally US size 7 or size 37 EU. She has blonde hair and a pair of hazel eyes.

Our contents are created by fans, if you have any problems of Kate Moss Net Worth, Salary, Relationship Status, Married Date, Age, Height, Ethnicity, Nationality, Weight, mail us at [email protected]