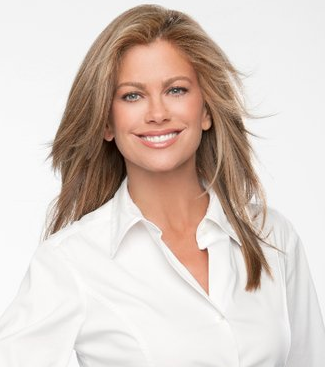 Beautiful and charming lady, Kathleen Marie Ireland who is multi-talented, professionally known as “Kathy Ireland”.She is a gorgeous American actress, model, entrepreneur, and author. Kathy Ireland is widely recognized for her appearance as a supermodel in ‘Sports Illustrated’ swimsuit issues.

This renowned actress and model, Kathy Ireland landed on this world on 20th March 1963 in Glendale, California, United States of America. Kathy holds an American nationality as she was born to American parents, Barbara Ireland and John Ireland. She follows the Christian religion and belongs to white ethnical background. Regarding her education, she completed her high school education at ‘San Marcos High School’ based in Santa Barbara, California. Later, she became enrolled at ‘American Intercontinental University’s School of Design’ from where she earned her University degree.

Extremely talented actress, Kathy Ireland often gets attention from people for her exquisite and exotic figure. Kathy has made an appearance as a model in various magazine covers where she looks damn hot. As of 2016, the gorgeous model and actress Kathy Ireland carry a seductive hourglass shaped body measurements size of 36-25-36 inches. Her bra cup size is 34B. To date, she has not undergone any plastic surgery. Sizzling actress, Kathy Ireland stands with a height of 5 feet 10 inches and weighs about 64 kg. Her eye color is Blue and her hair color is Auburn.

The career of Kathy Ireland

Kathy Ireland started her career as a model. She has been successful in grabbing the attention of people throughout the globe by making appearances on magazine covers of ‘Vogue’, ‘Cosmopolitan’ and ‘Forbes’.

From 1984 to 1996, she got featured in ‘Sports Illustrated Swimsuit Issues’. Kathy also appeared as a model on ‘25th Anniversary Swimsuit Edition’. It was in the year 1985 when this gorgeous lady initiated her acting career by appearing in an episode of television series named ‘Charles in Charge’. After three years of acting debut, she got featured as Wanda Saknussemm in the movie titled ‘Alien from L.A.’. Her performance in the movie was well appreciated by all the audiences.

In the year of 1989, she made an appearance in the movie named ‘Journey to the Center of the Earth’ which made her more popular in the entertainment industry. After earning much-needed fame and recognition, she has appeared in many successful acting projects like ‘Grand’, ‘Side Out’, ‘Necessary Roughness’, ‘Mom and Dad Save the World’, ‘Loaded Weapon’, ‘Amore!’, ‘Melrose Place’, ‘Girdlock’, ‘Suddenly Susan’, ‘The Incredible Hulk’, ‘Cosby’, ‘Pensacola: Wings of Gold’, ‘Once Upon a Christmas’ and many more. Kathy was last seen in an episode of the television series ‘Family Guy’.

Besides her successful acting career, Kathy has also been successful to earn fame and recognition as a founder of a brand marketing firm called ‘Kathy Ireland Worldwide’.

Net Worth of Kathy Ireland

At the start of 2018, the popular actress, model, and entrepreneur Kathy Ireland has earned an estimated net worth amount of $450 million dollars.

Significance to her personal life, the beautiful model and actress Kathy Ireland is a married woman. Kathy got married to a physician named Greg Olsen in the year 1988. From getting married to hubby Greg, she has been blessed with three children named ‘Erik’, ‘Lily’ and ‘Chloe’. There is no news published about the lovely couple going through divorce and separation yet. Kathy is spending a blissful and joyful moment with her husband at the present time.

Kathy Ireland has also been actively involved in philanthropy. She has lent her estate to many charity organizations like ‘Toys For Tots’. She was appointed as an ambassador for ‘Friends of Sheba Medical Center’. In 2012, she was honored with ‘Doctorate of Human Letters’ by California State University.

Our contents are created by fans, if you have any problems of Kathy Ireland Net Worth, Salary, Relationship Status, Married Date, Age, Height, Ethnicity, Nationality, Weight, mail us at [email protected]