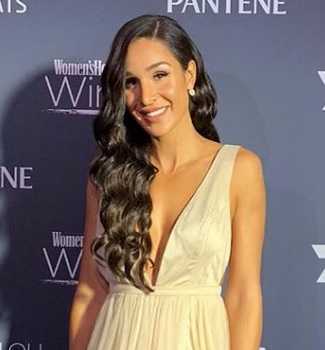 Kayla Itsines is a popular Australian personal trainer. She is also given the title, fitness queen. She is also an author and entrepreneur. She has released a series of fitness ebooks titled, Bikini Body Guided. She also has a meal planning and workout app titled Sweat with Kayla. Her app, Sweat with Kayla generated more revenue than any other fitness app in the year 2016.

Australian business magazine, BRW included Itsines and her partner Tobi Pearce in the 2016 BRW “Young Rich” list of the wealthiest Australians aged under 40, who had not inherited their money. Their net worth was estimated at $46 million then. She is one of only two among the 2017 AFR’s Rich List that are of Greek heritage.

The fitness queen has shared some good news for her well-wishers. Itsines and her fiance, Tobi announced via Instagram that she is 20 weeks pregnant and they are expecting a baby. She also expressed her excitement and happiness that her fiance has always been there for her.

She shared a video of her getting an ultrasound, with her fiance, Tobi right by her side. She wrote, “Tobi and I do not even have words to describe how happy and excited we are to bring you this news! If you don’t know already, I come from a big greek family. FAMILY is always what comes first in my life. To be able to start my own family with the person I love most in this world is just an absolute dream come true. @tobi_pearce has been SO supportive, SO EXCITED and so loving! He comes home every day, hugs and kisses my stomach. He lays on my legs and asks the baby how it’s day was. He is at every scan and every appointment. I couldn’t ask for a better partner. Our family, well haha.. you can just imagine –  they are of course ABSOLUTELY OVER THE MOON EXCITED. I Know you are already picturing the look on their faces when we told them.

I know you ladies probably have 1 million questions … but for now, let’s celebrate this amazing moment together as we are adding this news and our journey with you! Thank you everyone !! Tobi and Kayla song- Lukas Graham – Love someone”

– she is one of the popular fitness trainers in the world.

Kayla Itsines was born on 21 May 1991. She was born to Jim Itsines and Anna Itsines. She is of Greek descent. She was born in Adelaide, South Australia in Australia. She holds Australian nationality. Initially, she dreamt of becoming a beauty therapist. She has a sister named Leah Itsines. Her zodiac sign is Gemini. She follows Christianity.

She had keen interests in sports while growing up, especially in playing basketball. She was fascinated by the gym, that led her aim of becoming beauty therapist to a fitness trainer. She graduated from the Australian Institute of Fitness at the age of 18 to become a Master Trainer.

After graduation, Kayla started working at a women’s gym in Adelaide.

She started training her sister’s friends, helping them to improve their core strength and powerful legs to play Netball.

She started using Instagram to promote her new exercise methods by sharing a picture of her clients taken before-and-after their progress in the body.

Her partner, Tobi Pearce suggested and helped to compile her routines into an ebook and sold them online.

In March 2013, Itsines and her partner Tobi founded the Bikini Body Training company, where Itsines became a director and Pearce became a CEO.

In January 2014, their company published the first two Bikini Body Guides, with Itsines’ workouts in Volume one, and nutrition information from dietitians Julie Dundon and Anne Schneyder of Nutrition Professionals Australia in Volume two.

Her high-intensity workouts and meal plans did not focus either on weight loss or muscle gain. It focused on the creation of a particular look.

In 2015, she embarked on a world tour, the “Kayla Itsines Bootcamp World Tour”, leading free group fitness classes. She toured in the cities of Australia, the United States and in London.

In April 2015, Itsines was featured in an Apple advertisement for the Apple Watch, which demonstrates the heart-rate monitor feature of the product.

She released her fitness app, Sweat With Kayla in November 2015.

In November 2016, she published her first print book, The Bikini Body 28-Day Eating and Lifestyle Guide.

In November 2017, she published her second book, The Bikini Body Motivation & Habits Guide.

She continues her personal training to her long-time clients, as well as her staff.

Itsines is engaged to her long-time boyfriend, Tobi Pearce. They got engaged in April 2018. They first met at a gym in 2013. They have lived together since then. Itsines and her fiance announced via Instagram in December 2018, that they are expecting their first child in May 2019.

Itsines does not drink alcohol. She gave up drinking alcohol in 2011.

Kayla Itsines stands at a height of 1.65 m i.e. 5 feet and 5 inches tall. She has a body weight of 126 lbs i.e. 57 kg. As a fitness trainer, she has an athletic body. She has maintained her body perfectly. She has dark brown eyes and her hair color is also dark brown.

Net Worth of Kayla Itsines

Kayla Itsines is considered the fitness queen. In 2016, her app, Sweat With Kayla generated more revenue than other fitness apps. Itsines and her partner, Pearce’s net worth was reported at around $46 million. They were included in the BRQ “Young Rich” list of the wealthiest Australians aged under 40 in 2016. As of 2018, the net worth of fitness queen is estimated at around $63 million.

Our contents are created by fans, if you have any problems of Kayla Itsines Net Worth, Salary, Relationship Status, Married Date, Age, Height, Ethnicity, Nationality, Weight, mail us at [email protected]