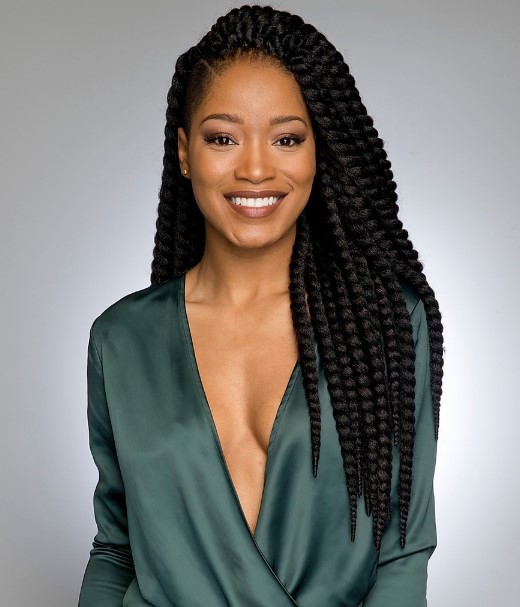 Keke Palmer is an American actress, singer, songwriter, and television personality, who made her acting debut in the 2004 film “Barbershop 2: Back in Business” and singing debut with her first album, “So Uncool” on September 18, 2007. Palmer rose to prominence with her breakthrough role in “Akeelah and the Bee”(2006) and “Madea’s Family Reunion”(2006). In her over a decade career, she won several nominations and 13 awards including 6 NAACP Image Awards. Besides, she is also active in social media with her Instagram account: @keke Twitter account: @KekePalmer.

What is Keke Palmer Famous for?

Where was Keke Palmer Born?

Keke Palmer was born on August 26, 1993, in Harvey, Illinois, United States. Her birth name is Lauren Keyana Palmer. Her nationality is American. Palmer belongs to African-American ethnicity while Virgo is her zodiac sign.

Keke Palmer was born in a well-to-do family to Sharon Palmer(mother) and Larry Palmer(father). Her father works for a polyurethane company, while her mother is a high school teacher who works with children who are autistic. Besides, both of her parents are former professional actors. Keke has three siblings, a brother Lawrence Palmer and two sisters, Lawrencia and L’Oreal Palmer.

Keke attended Rickover Jr. High School and St. Benedict School after which she was home-schooled. She began to sing at a very early age that she even urged her mother to let her sing solo in church. She didn’t disappoint her mother as when she was 5, she surprised everyone with her rendition of “Jesus Loves Me”.

Later, her family moved to Los Angeles, so that Keke could get more opportunities in show business. She even had auditioned for a stage production of The Lion King at age nine.

Who is Keke Palmer Married to?

Keke Palmer is currently single. Palmer was previously in a relationship with Rodney King. Palmer had a crush on King since the day, she saw him on the set of “True Jackson, VP” in 2008 shortly after then they began dating in 2010. They even had planned to get married but after 3 years of their relationship, they broke up in 2013.

She then started dating Quincy Brown, a model, actor, and singer in 2013, however, after 4 years of their relationship, they broke up in 2017. Besides, she also dated actor, Corbin Bleu in 2007 and was seen going out with rapper, Lil Twist in 2009.

What is the Net Worth of Keke Palmer?

The 26 years old, Keke Palmer has quite good earnings from her professional career as an actor and singer. Working in the show business field for more than a decade, she has managed to amass a million worth fortune from her several albums and movies.

Her estimated net worth is around $10 million. Besides, she earned $20,000 per episode of “True Jackson VP”, which made her the fourth-highest-paid child star on television at the time.

How Tall is Keke Palmer?

Keke Palmer is undoubtedly a beautiful lady in her 20s. Palmer has a well-maintained slim body physique of measurement 36-25-37 inches. She stands tall with a height of 5ft. 6inch.(1.68m) while her body weighs around 57kg(126 lbs). She has a dark complexion with black hair and dark brown eyes.

Our contents are created by fans, if you have any problems of Keke Palmer Net Worth, Salary, Relationship Status, Married Date, Age, Height, Ethnicity, Nationality, Weight, mail us at [email protected]