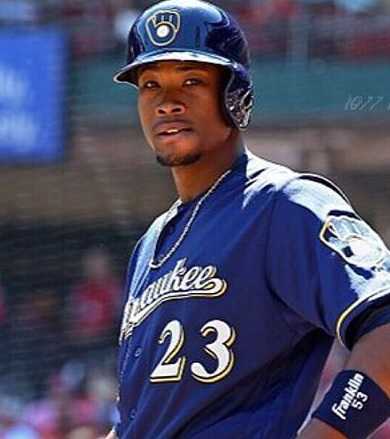 Keon Darell Broxton popular by the name Keon Broxton is an American professional baseball player who plays for the New York Mets of Major League Baseball (MLB). He plays as an outfielder and wears shirt number 23. He bats right and throws right as well. Previously, he played for Pittsburgh Pirates and Milwaukee Brewers. He made his MLB debut on 21 September 2015 for the Pittsburgh Pirates. The Brewers traded Broxton to the New York Mets for Bobby Wahl, Adam Hill, and Felix Valerio in January 2019.

Keon Broxton was born on 7 May 1990. His birthplace is in Lakeland, Florida in the United States. He holds an American nationality. Information regarding his parents is currently unavailable. The information about his siblings is also unavailable at present.

The career of Keon Broxton

The Philadelphia Phillies selected Broxton in the 29th round of the 2008 MLB Draft.

The Arizona Diamondbacks selected him in the third round of the 2009 MLB Draft.

He played for the Missoula Osprey of the Rookie-level Pioneer League, South Bend Silver Hawks of the Class A Midwest League, and Visalia Rawhide of the Class A-Advanced California League.

The Diamondbacks assigned him to the Reno Aces of the Class AAA Pacific Coast League for the Triple-A National Championship Game.

In 2013, he then played for the Mobile BayBears of the Class AA Southern League.

The Pittsburgh Pirates signed Broxton in March 2014 for a player to be named later.

In 2014, he played for the Altoona Curve of the Class AA Eastern League.

He made his MLB debut in September 2015.

In December 2015, the Pirates traded Broxton and Trey Supak to the Milwaukee Brewers for Jason Rogers.

He remained in the Brewers’ minor league system with the Colorado Springs Sky Sox of the PCL during the start of the 2018 season.

The Brewers traded him to the New York Mets for Bobby Wahi, Adam Hill, and Felix Valerio on 5 January 2019.

Keon Broxton is in a relationship with Dominique Alexa. They both grew up in Lakeland, Florida. They reportedly live together. The latest updates regarding their affair are yet to surface.

Broxton was arrested for misdemeanor trespassing in November 2016. He was reportedly intoxicated and refused to leave the scene of a fight while responding police officers warned him to leave.

The28-years old, Keon Broxton stands at a height of 1.91 m i.e 6 feet and 3 inches tall. He has a bodyweight of 200 lbs. He has an athletic body build. He has managed his body well.

Net Worth of Keon Broxton

Our contents are created by fans, if you have any problems of Keon Broxton Net Worth, Salary, Relationship Status, Married Date, Age, Height, Ethnicity, Nationality, Weight, mail us at [email protected]