Killer Mike who is officially known as Michael Render is an American actor, rapper and activist. 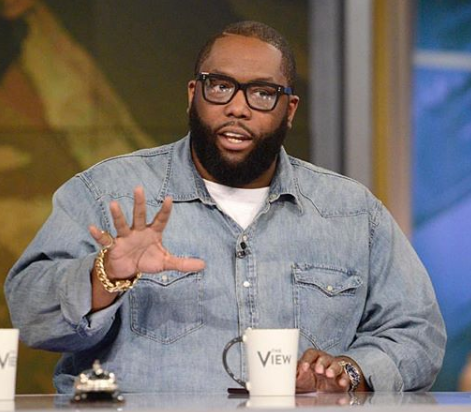 Killer Mike who is officially known as Michael Render is an American actor, rapper and activist. He is Grind Time Official Records’ founder. It was launched through the Fontana Distribution and the SMC Recordings.

Going back to his early life, the rapper opened his eyes for the first time on April 20, 1975, with Aries birth sign. His birth name is Michael Santiago Render. Killer Mike was born in Atlanta, Georgia, United States. His Father was a policeman and his mother was a florist and also worked as a drug trafficker. However, the information regarding his siblings is unknown. He is American by nationality and belongs to the Afro-American ethnicity group.

Regarding his education, He went to the Douglass High School in Atlanta and certified in 1993. He then got admission at the Morehouse College in Atlanta in 1995. However, Mike dropped out of college shortly after.

Killer’s debut appearance was in Stankonia’s single called Snapping & Trapping by Outkast. The following year, he made another appearance in their single titled The Whole World. That same year, he appeared in Jay-Z’s album, The Blueprint 2 in its single titled Popping Tags.

His debut album called Monster was released in 2003. Two of its singles were Akshon as well as A. D. I. D. A. S. Having been recorded in 2005, the conflict between Big Boi and Sony Records delayed the release of his second album titled Ghetto Extraordinary. It was released three years later as a mixtape. In 2006, Killer released I Pledge Allegiance to the Grind as his second official album.

Cartoon Network introduced Mike to El-P who is a rapper and a producer in 2011. He produced his album known as R.A.P. Music the following year. He was also a guest on Butane song and the album, Cancer 4 Cure both by El-P. They later formed a duo which they gave the name Run the Jewels. On 26th June 2013, they released an eponymous album. The following year on 28th October, they released their second one called Run the Jewels 2. A third one named Run the Jewels 3 was released in 2016 on 24th December.

As an actor, Mike has portrayed characters in three films. They are Idlewild, 20 Funerals and ATL. Between 2006 and 2008, he voiced the character of Taqu’il in Frisky Dingo cartoon. Also, a Boost Mobile phone in Aqua Teen Hunger Force.

On 1st November 2011, he and his wife Shana opened a barbershop. It is located in Atlanta, Georgia and bears the name Graffitis SWAG. Furthermore, Mike is an activist who focuses on police brutality, social equality, and systemic racism.

Net Worth of Killer Mike

Killer Mike has an estimated net worth of around $5 million. His primary source of income is music career. Mike has made money from the sales of his album either as a solo artist or a duo. Some musicians have also featured him in their songs. His other source is the portraying of various characters in different films. Besides that, he and his wife own a barbershop.

Turning some pages of his personal life, his current marital status is married. Killer Mike enjoys keeping his private life away from the spotlight so not much is grasped about his wife Shana Shay. The dating for a long time before getting married in 2006. They also share four children together; Pony, Mikey, Aniyah, and Malik.

Additionally, the duo also runs their barbershop Graffitis SWAG (Shave, Wash, And Groom) in Atlanta, Georgia. They opened it back in 2011 and they are planning to open 150 more shops across the United States over time. In his rare interviews, Mike has credited his wife for his success and achievements. Moreover, Mike has a straight sexual orientation.

Looking at his body statistics, Killer Mike has trimmed beard and overweight frame. He stands at the height of 6 feet 3 inches or 190.5 cm. His body type is large with weight 120 kg or 265 pounds.

Similarly, he has black hair and his eyes are black too. However, his body specifications like chest, waist and biceps measurements are unknown.

Our contents are created by fans, if you have any problems of Killer Mike Net Worth, Salary, Relationship Status, Married Date, Age, Height, Ethnicity, Nationality, Weight, mail us at [email protected]