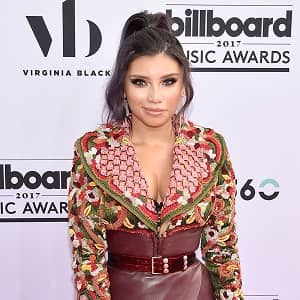 Kirstin Maldonado is a popular and successful American singer. She rose to fame as a member of the music group Pentatonix. Her group is extremely popular, having multiple platinum albums with three Grammy wins so far.

When was Kirstin Maldonado born?

Kirstin Maldonado was born on the 16th of May, 1992 in Fort Worth, Texas, U.S.A. As of 2020, her age is 28. Her nationality is American and her ethnicity is mixed. She comes from Mexican, Italian, and Spanish ancestry.

Kirstin was born to parents Michael Cisneros (father) and Angelica Maldonado (mother). She was raised in Texas by her mother. She has not said anything regarding her siblings, so she might be a single child.

Talking about her education, Kirstin attended Holy Rosary Catholic school. She soon transferred and graduated high school from Martin High School in 2010. Later, she joined The University of Oklahoma where she was a Musical Theater performance major.

How did Kirstin Maldonado build her career?

Kirstin had a passion for music at a very young age. She practiced a lot of singing and later met a like-minded friend, Scott Hoying in high school. Together they formed Pentatonix for NBC’s Capella competition. They also got three other members Avi Kaplan, Kevin Olusola, and Mitch Grassi. The group performed really well and went on to win the 3rd season of the competition, The Sing-Off.

Winning such a high profile competition instantly launched them to fame. Their style of music was appreciated by a large audience and since then, they released several albums and EPs. They have worked with other popular artists such as Daft Punk. And, as a member of Pentatonix, Maldonado has won 3 Grammys.

Kirstin is also popular as a solo singer and has worked with several popular artists. She has released solo singles Break a Little, All Night, and Naked which have been received quite well. She even released her own EP L O V E – EP in 2017.

What is Kirstin Maldonado’s net worth?

What are Kirstin Maldonado’s physical statistics?

Kirstin stands at a height of 5 feet 4 inches and weighs approximately 57 kilograms. Along with her good looks, she has beautiful blue eyes and black hair. Her body measurements are 37-26-37 inches.

Who is Kirstin Maldonado dating?

Kirstin Maldonado is currently in a relationship with her longtime boyfriend Jeremy Michael Lewis. The two dated for a while and eventually got engaged on the 29th of May 2016. However, they said that they had postponed their marriage due to several issues. They are still together though and are seen together in photos and real life.

Our contents are created by fans, if you have any problems of Kirstin Maldonado Net Worth, Salary, Relationship Status, Married Date, Age, Height, Ethnicity, Nationality, Weight, mail us at [email protected]