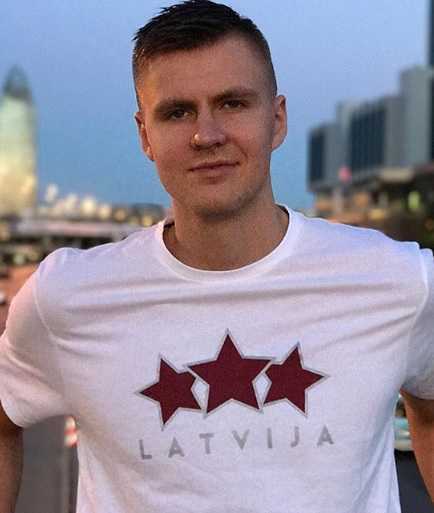 Kristaps Porzingins is a Latvian professional basketball player. He plays for the Dallas Mavericks of the National Basketball Association (NBA). he plays both the power forward and center position. He was traded by the New York Knicks to the Mavericks in January 2019. New York Knicks selected him with the fourth overall pick in the first round of 2015 NBA draft. He began his professional career from Spanish club, Sevilla. One of the tallest NBA stars has over 1.6 million followers on his Instagram.

One of the tallest NBA players has now joined Dallas Mavericks from the New York Knicks. The New York Knicks traded Kristaps along with Trey Burke, Tim Hardaway Jr., and Courtney Lee to the Mavericks in an exchange for DeAndre Jordan. Wesley Matthews, Dennis Smith Jr., and two future first-round draft pick.

Kristaps went on to Instagram to say his goodbye to the Knicks. He shared a picture of him wearing the Knicks Jersey and wrote, “New York will always have a special place in my heart. Grateful for everybody who made this journey so special for my family and me”.

It was the same Kristaps who got booed by some New York fans upon getting drafted. At the time, he vowed to change the fans’ opinions. He became the fans’ favorite in his rookie season.

Kristaps Porzingis was born on 2 August 1995. He was born to a father Talis Porzingis, and a mother Indriga Porzinge. His birthplace is in Liepaja in Latvia. He holds Latvian nationality. He had 2 siblings. They are Janis and Martins Porzingis. His brother Toms died at 14 months.

An agent from Latvia sent Porzingis’ video to teams in Spain and Italy. Baloncesto Sevilla called him for a foreign talent recruit trial in 2010. He received and accepted the contract offer from the club.

He debuted for the Sevilla’s youth squad in January 2012 against Barcelona.

He made his senior debut for the club against CB Murcia in September 2012. He played only for a minute in his debut game.

He declared himself eligible for the 2014 NBA draft in April. Many NBA teams showed interests in drafting him. However, he withdrew his name in order to develop his skills.

His performance in the 2014-15 EuroCup earned him the EuroCup Rising Star Award of the season. At 18, he became the youngest ever to win the award.

He was also named in the ACB All-Young Players Team of the 2014-15 season.

He entered the 2015 NBA draft in April. He was already one of the top prospects of the 2014 NBA Draft. He withdrew his name to develop his skills more.

He became popular as a lottery pick and a potential top-5 selection in the 2015 NBA draft.

The New York Knicks selected him with the fourth overall pick in the first round of the 2015 NBA draft, making him the highest drafted Latvian and Baltic player in NBA history.

He became the first 20-year-old since Shaquille O’Neal in 1992-93 to have 24 points, 14 rebounds and seven blocked shots in a game. He achieved this record in a game against Houston Rockets in November 2015.

He finished his rookie season with averages of 14.3 points, 7.3 rebounds, 1.3 assists and 1.9 blocks per game, missing the final seven games of the season due to a right shoulder strain.

He earned NBA All-Rookie First Team honors and finished second in the NBA Rookie of the Year Award behind Karl-Anthony Towns.

He came off the bench for the first time in his NBA career in January 2017. He had returned from the sore left Achilles tendon recovery.

He won the Skills Challenge in the Rising Stars Challenge during the 2017 All-Star Weekend.

He was named an Eastern Conference All-Star reserve in January 2018.

He did not play during the 2018-19 season as he was recovering from the ACL injury sustained earlier in February 2018.

The Knicks decided not to extend his rookie contract in October 2018. Thus, The Knicks traded him along with Trey Burke Tim Hardaway Jr., and Courtney Lee to the Dallas Mavericks on 31 January 2019. The Mavericks traded DeAndre Jordan, Wesley Matthews, Dennis Smith Jr., and two future first-round draft picks in return.

Porzingis has played for the Latvian youth team and has represented Latvia national team at the 2013 FIBA Europe U18 Championship, where he was named in the All-Tournament Team.

He was named the Latvian Rising Star of the Year in 2015.

He represented Latvia at EuroBasket in 2017, where Latvia exited from the quarterfinals after losing to Slovenia.

Kristaps is reportedly single. He has managed to keep his personal life a secret. He might be dating someone. The relationship status about the young rising player is uncertain. And no rumors regarding his affairs has surfaced yet.

Kristaps Porzingis stands at a height of 2.21 m i.e. 7 feet and 3 inches tall. He is one of the tallest active basketball players in the NBA. His height has given him a significant advantage while playing. He has a body weight of 240 lbs i.e. 109 kg.

His rookie contract was reported at $18 million on a four-year deal. He has an endorsement deal with Nike for his rookie season. The following season, he signed a shoe deal with Adidas, which became the most profitable deal for a European player. As of 2019, his net worth is estimated at around $8 million.

Our contents are created by fans, if you have any problems of Kristaps Porzingis Net Worth, Salary, Relationship Status, Married Date, Age, Height, Ethnicity, Nationality, Weight, mail us at [email protected]