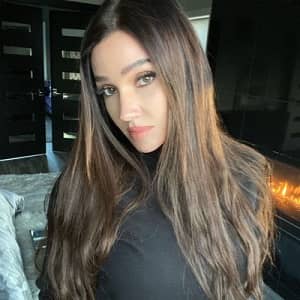 Kristina Basham is a social media personality. She gained popularity after she started dating writer and cartoonist Scott Adams, who is 31 years older than her. She is a model as well as a musician.

Kristina was brought up on 31 July 1988 and is currently 32 years old. She was born and raised in Walnut Creek, California, USA so, she holds an American nationality. Further, she falls under the zodiac sign of Leo and belongs to the British ethnicity.

As for her parents, her father Valmor Bagala is of French and Italian descent and is a musician and her mother Mary Posthauer-Olry is of German descent and is working at Kemper Sports. She was raised by her father after her parents divorced during her teenage years. Moreover, Kristina has a younger brother named Scotty and an older sister named Valerie Bagala.

Talking about her education, she attended high school in her hometown and took part in cross country running. She has won a gold medal in a 20-mile race. Kristina completed her bachelor’s degree in financial economics in 2010 from the University of California, Berkeley. Moreover, she received her master’s degree from the same college in the year 2012.

How did Kristina Basham rise to fame?

Kristina Basham gained popularity for her modeling career and her relationship with the famous writer and cartoonist Scott Adams. She began her modeling journey at the age of 11 and has continued it to this day. Some sources claim she was only nine when she was recruited by a modeling scout and she signed her first modeling contract with the permission of her parents and promised to stay focused on her education as well. She also had an interest in playing the piano and the violin and by the time she was in high school, she was already a multi-instrumentalist.

Kristina modeled as a child and then started modeling as a teen from January 1997 to February 2002, before focusing on her education. She again resumed her modeling career in February 2010 and did catwalk on fashion shows of various famous designers for seven years, she then retired from it in May 2017.  Kristina has also stayed as a brand ambassador of many companies and designers such as Emirates Airlines, Adidas Golf, and Aston Martin from February 2015 until her retirement. During her modeling days, she has been featured in many famous magazines as well.

Currently, she has been running her own bakery which is located in San Francisco and she has been working as a pianist and a violinist. And also she is famous on Instagram with 4 million fans following her. She posts her modeling photos and videos of her playing piano.

How much net worth does Kristina have?

What is the relationship status of Kristina Basham?

Kristina Basham was married to Hilsabeck before getting a divorce in 2014, after just four years of marriage. They both met at the University of California, Berkeley, and have two daughters named Hazel and Marin. In the same year of divorce, she started dating Scott Adams who had divorced his ex-wife Shelly Miles in 2014 after eight years of marriage.

What are her body measurements? Height, Weight

Kristina is beautiful and still young-looking. She stands tall at the height of 5 feet 6 inches (1.71m) and weighs around 55 kg (120lbs). The vital statistics of her chest-waist-hips are 34-24-35 inches. Her shoe size is 6 (US). Moreover, she has silky long black hair and a pair of black eyes.

You may also like to read more about the Bio, Age, Parents, Family, Net Worth, and more about Briann Corbin, Louise Anstead, Sophia Umansky, and more.

Our contents are created by fans, if you have any problems of Kristina Basham Net Worth, Salary, Relationship Status, Married Date, Age, Height, Ethnicity, Nationality, Weight, mail us at [email protected]