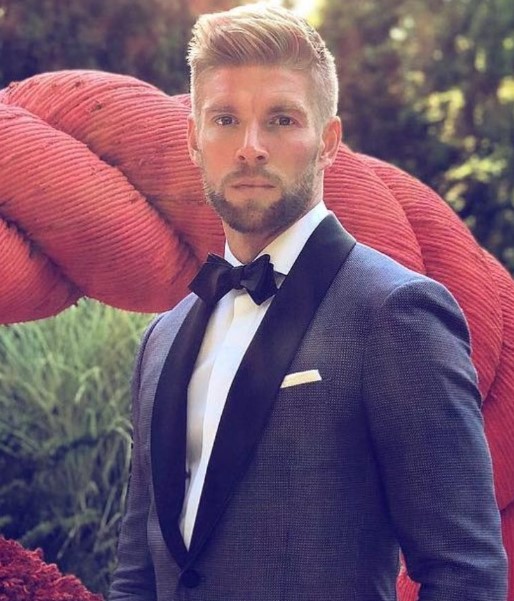 Kyle Cooke is an American TV personality who is best known for his appearance on American reality television series aired on the network of Bravo, “Summer House”. The show holds a great basis for his relationship with his now fiance, Amanda Batula that became one of the significant story plots of the series since its first season aired in 2017.

Cooke is also an entrepreneur and is known for his nutrition consulting app, “FENIX”. Besides, Coke is quite popular in social media sites with over 226k followers on his Instagram account: @imkylecooke.

What is Kyle Cooke Famous for?

Where was Kyle Cooke Born?

Kyle Cooke was born on August 4, 1982, in Baltimore, Maryland, United States. His birth name is Kyle Cooke. Cooke belongs to White ethnicity while Leo is his zodiac sign.

Cooke was born to American parents and was raised along with his brother named Cary Cooke. He grew up in his hometown and attended later got graduated from Babson College, Boston Area, earning an MBA degree in 2011.

Soon after his graduation, he pursued his career to become an entrepreneur.

Kyle Cooke is a successful entrepreneur and was the founder of a night club, “Nighjockey, Inc.” based in New York City. The company used to create a management solution for the restaurant and nightlife industry.

Previously, in April 2013, he worked for ZocDoc, as a sales manager to achieve sales targets and the company’s strategic objectives. He worked in the company for over 1 year after which he moved to Dallas, where he worked as a co-founder and advisor in “Blown away”.

In September 2015, Kyle moved back to New York City where he joined Birddogs and began working as a Chief Brand Officer. While working on Birddogs, he founded a nutrition consulting application called “FENIX”, which is also available on the Apple Store for iOS devices under the name “FENIX 1:1”. He is also the founder of a cider-manufacturing company titled “Loverboy, Inc.” which was founded in 2020.

Kyle Cooke began his career as a TV personality with his first appearance on season 1st of the popular Bravo reality series, “Summer House” aired on January 13, 2017. He got more attention for his relationship with his now fiance, Amanda Batulat.

Cooke appeared in the show as one of the emerging actors and became popular on social media sites with over 226k followers on his Instagram. With the ending of the series’s third season and with his proposal to Amanda last year, Cooke is now struggling to build their relationship back up while juggling new challenges in the new season.

In the ongoing pandemic of COVID-19, all other cast members of the series including Jules Daoud, Paige DeSorbo, Carl Radke, Lindsay Hubbard, Luke Gulbranson, Hannah Berner, and Amanda Batula reunited via Zoom on Wednesday night’s episode of “Watch What Happens Live with Andy Cohen,” appeared on May 6, 2020.

Who is Kyle Cooke Dating?

Kyle Cooke is currently engaged to his long-term girlfriend, Amanda Batula. Amanda is a senior art director and graphic designer. The couple was seen publicly for the first time in the TV show, “Summer House” together. They started dating since 2015, and have been in on-and-off relations. They were seen spending quality time at the show in 2017. However, in May 2017, they decided to take a break and focus on their respective careers.

It was also revealed that Kyle had made out with reality star Katie Maloney, who is also a co-star of “Summer House” during Amanda’s birthday. However, the couple came back together as Kyle posted a photo with Amanda clarifying his bond with her posted on April 5, 2018. After two years of pure dating, with their on and off relations going on, Kyle Cooke and Amanda Batula got finally engaged in September 2018.

What is the Net Worth of Kyle Cooke?

Kyle Cooke has good earnings from his career as an entrepreneur and TV personality. Being a rising personality, he must have managed to amass a good fortune from his more than 5 years of career. His current net worth is estimated at roughly around $1.1 million.

How Tall is Kyle Cooke?

Kyle Cooke is a handsome man in his 30s. Cooke has a well maintained athletic body physique. He has a fair complexion with light brown hair and green eyes. He stands tall with a height of 5ft. 11inch.(1.80m) while his body weighs around 80kg(176 lbs).

Our contents are created by fans, if you have any problems of Kyle Cooke Net Worth, Salary, Relationship Status, Married Date, Age, Height, Ethnicity, Nationality, Weight, mail us at [email protected]