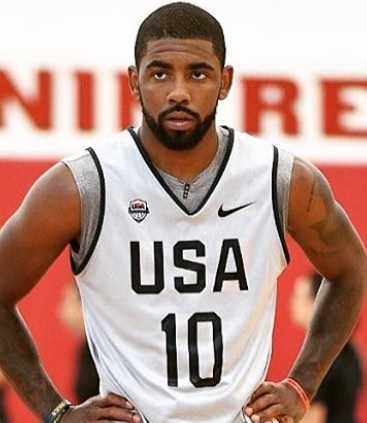 Kyrie Andrew Irving, professionally known by the name Kyrie Irving is an American professional basketball player. He plays for the Boston Celtics of the National Basketball Association (NBA). He plays in the point guard position and wears shirt number 11. Cleveland Cavaliers selected him with 1st overall pick in the first round of 2011 NBA draft. He played for the Cavaliers from 2011 to 2017 before joining the Celtics. He helped the United States to win FIBA World Cup in 2014.

He is also an occasional actor and has appeared in the 2018 film, Uncle Drew. He has over 12.4 million followers on his Instagram.

Both Kyrie Irving and LeBron James claimed a re-definition of their relationship after Irving called his former Cavaliers’ teammate. Irving reportedly called LeBron James and apologized to him for not being a better teammate he had to be.

Irving has hinted that he would leave his current club, Boston Celtics.

– He won the NBA Rookie of the Year Award.

– He won FIBA World Cup MVP and gold medal for the United States in 2014.

– He is the fourth American player to win NBA Championship and an Olympic gold medal in the same year.

Kyrie Irving was born on 23 March 1992. He was born to American parents, Drederick Irving, a father, and Elizabeth Irving, a mother. He belongs to black ethnicity. His birth place is in Melbourne, Victoria, in Australia. His zodiac sign is Aries. He follows Christianity religion. He has 2 siblings, Asia, an older sister, and London, a younger sister. His father played college basketball at Boston University. Upon completing college career, his father moved to Australia to play professional basketball for the Bulleen Boomers in the SEABL. Thus, Kyrie was born in Australia. And he holds dual American and Australian citizenship. When he was two years old, his family moved back to the United States. He grew up in West Orange, New Jersey.

He attended Montclair Kimberley Academy and St. Patrick High School. After graduating from high school, he attended Duke University, where he attended only for a year and declared himself for the 2011 NBA draft.

As a teenager, he played for the Road Runners of the Amateur Athletic Union (AAU).

He played his freshman and sophomore years at Montclair Kimberly Academy, where he led the team to first New Jersey Prep B state title.

He then transferred to St. Patrick High School, where he led the team to its third New Jersey Tournament of Champions title in four years.

He helped USA East to win the tournament title in the Nike Global Challenge in August 2009, where he was named MVP of the tournament.

He was selected to the 2010 Junior National Select Team.

He also played in the 2010 McDonald’s All-American Game and the 2010 Jordan Brand Classic. He was named MVP along with Harrison Barnes.

He enrolled at Duke University, where his performance made him a strong contender for NCAA Freshman of the Year.

The game against Arizona at the NCAA Tournament became his last game at the college level. He forgo his final three seasons at Duke to enter the 2011 NBA draft.

Cleveland Cavaliers picked him with the first overall pick in the first round of the 2011 NBA draft.

He earned MPV honors at the 2012 Rising Stars Challenge.

He was also named the 2012 NBA Rookie of the Year.

He was the only unanimous selection to the NBA All-Rookie First Team.

He became the youngest player in NBA history to score 40 points in Madison Square as he scored his then career-high 41  points against the New York Knicks.

He won the NBA Three-Point Shootout scoring 23 points in the final round.

He led the Cavaliers to reach the NBA Finals for the second time in their franchise history, which they lost the series to the Warriors. He was ruled out of the rest of the series due to fractured left kneecap injury in the Game 1 of the NBA Finals.

He led the Cavaliers to reach their second consecutive NBA Finals, where they once again faced the Golden State  Warriors for the second straight year.

The Cavaliers were lagging 3-1 to the Warriors, Irving and LeBron James stepped up to make 3-3 until the Game 6.

Irving and LeBron James became the first teammates to each score 40 points in an NBA Finals game. The Cavaliers won the series 4-3, becoming the first team to come-back from 3-1 finals deficit.

In 2017, the Cavaliers once again met Golden State Warriors for the third straight years in NBA Finals. They lost the series by 4-1.

He requested the Cavaliers to trade him in July 2017. The next month, the Cavaliers traded him to the Boston Celtics in exchange for Isaiah Thomas, Jae Crowder, Ante Zizic, and the rights to Brooklyn Nets’ 2018 first-round draft pick.

He made his Celtics debut in their season opener against his former club, Cleveland Cavaliers in October 2017.

The Celtics set their longest winning streak in seven years with 9 straight wins during the early 2017-18 season.

He was ruled out for three to six weeks after undergoing a minimally-invasive procedure to remove a tension wire in his left knee in March 2018. He was later ruled out for the entire postseason with a recovery time of four to five months for another procedure.

He became the first Celtics player since Antoine Walker in 2001 to score at least 40 points with 10 or more assists in a single game in November 2018.

As he was born in Australia, he was eligible to represent both Australia and the United States. Australia offered him to represent Australia at the 2012 Olympics. However, he chose not to play for his birth nation. He focused to earn a spot for the American basketball team.

Previously, he won the gold medal of United States U18 at the FIBA Americas U18 Championship.

He represented United States at the 2014 FIBA Basketball World Cup.

He helped the American team to win gold at the 2014 FIBA Basketball World Cup, being named the tournament’s MVP.

For his contributions to the national team, he was named the 2014 USA Basketball Male Athlete of the Year.

He helped Team USA to win the gold medal at the 2016 Summer Olympics.

He played the role of Uncle Drew in a series of Pepsi Max commercials in 2012.

He wrote and directed episode 2 and 4 of “Uncle Drew”.

He later starred as the same character in a self-titled feature film, Uncle Drew, released in 2018.

Earlier, he has appeared in an episode of Disney XD series Kickin’ It in 2012.

He has appeared in an episode of We Bare Bears in 2016.

He has appeared in an episode of the Houzz series, My Houzz.

He guest starred lending his voice roles in an episode of the 17th season of Family Guy in 2018.

Kyrie Irving has a daughter named Azurie Elizabeth Irving, born on 23 November 2015. His daughter’s middle name Elizabeth was given to her in honor of his late mother.

He signed a five-year contract extension for $90 million with the Cavaliers in July 2014. He has also appeared in Pepsi Max commercials in 2012. He launched his PSD Underwear collection in 2015. He has also appeared in Nike ad. He has signed an endorsement deal with Foot Locker, Skullcandy, and EA Sports. As of 2019, his net worth is estimated at around $50 million.

Our contents are created by fans, if you have any problems of Kyrie Irving Net Worth, Salary, Relationship Status, Married Date, Age, Height, Ethnicity, Nationality, Weight, mail us at [email protected]