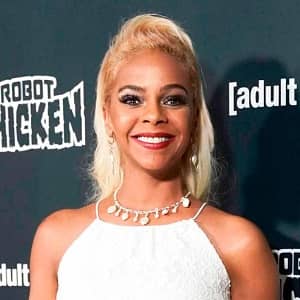 Lark Voorhies is a prominent actress, singer, and model from America. She is most famous for playing as Lisa Marie Turtle on the NBC sitcom “Saved By The Bell” (1989–1993). She was even nominated for the Young Artist Award six times during which she became the winner two times in 1990 and 1993 for her work.

How old is Lark Voorhies?

Lark Voorhies was born on the 25th of March 1974, in Nashville, USA. She is American by nationality and is currently 46 years old. Talking about her family and childhood, she was born to parents Tricia and Wayne Holloway. Moreover, her mother named her Lark after a character in the movie Cool Breeze.

Later, Lark changed her surname to Voorhies for the stage purpose. Lark was born in Nashville but later she was brought up in California. Academically, there is no information which is available on her schooling or college. However, it is known that Lark started acting early at the age of 12 with her first assignment for the King Kong encounter attraction designed by Universal Studios.

How is the professional life of Lark Voorhies?

Referring to the professional life of Lark Voorhies, she has an active career in movies, music, and writing. She made her acting debut with her major breakthrough in the TV series Good Morning, Miss Bliss. The show was produced by the Disney Channel and later bought by NBC. The company renamed the show to Saved by the Bell, which ran for over 4 consecutive years. Lark later appeared for its sequel Hawaiian Style and Wedding in Las Vegas.

Likewise, she has also starred in popular TV shows like Days of our Lives and Bold and the Beautiful. Moreover, she had a guest appearance in the TV series Star Trek and Family Matters. Moving forward with her career, she extended her TV career and acted in 8 movies like Measure of Fath and Little Creeps.

For her music career, she stepped into the world of music with her band The Third Degrees. The band is regarded as an alternative band and she is the lead singer in it. Moreover, she has appeared in some other music videos as well. Furthermore, she has written about three books, Trek of the Cheshire, Reciprocity, and A true light.

What are her awards and achievements?

Lark Voorhies has no doubt accomplished herself as an actress and a model. She has been recognized and awarded for her outstanding on-screen performances multiple times. Over the past few years, Lark has been nominated six times for the young artist award from the year 1989 to 1993. Moreover, she is even nominated for various categories like best young actress and outstanding ensemble for her TV series Good Morning, Miss Bliss, and Saved by the Bell.

For her awards, she has won the award two times throughout her career, once in 1990 and second time in 1993.

As of the year 2020, Lark Voorhies is currently single and is not married to anyone. However, during the past, she was in a relationship with Mark-Paul Gosselaar for a while. During 1993, she was engaged to be married to the actor Martin Lawrence. However, the engagement was called off.

Moreover, she was married to Miguel Coleman in 1996 just to divorce in 2004. She exchanged the marriage vows in April 2014 with Jimmy Green who is a music engineer. However, six months later, Green filed for divorce in October 2015.

For her net worth and earnings, it is no doubt that Lark has earned a decent amount of money and fame through her profession. Based on some online resources, she has an estimated net worth of about $500 thousand at present. However, there is no record of her salary and asset details which is available on the public domain.

How tall is Lark?

Physically, Lark stands tall with a height of 5 feet 3 inches and weighs about 54 kg. Similarly, her hair color is black and her eye color is also black. Moreover, she wears a shoe size is 8US and has a body measurement of 32-24-32 inches to chest-waist-hip giving her a quiet hour-glass shape.

Our contents are created by fans, if you have any problems of Lark Voorhies Net Worth, Salary, Relationship Status, Married Date, Age, Height, Ethnicity, Nationality, Weight, mail us at [email protected]