Larry King is most famous for his late-night talk show Larry King Live, which he hosted for 25 years at CNN news source. 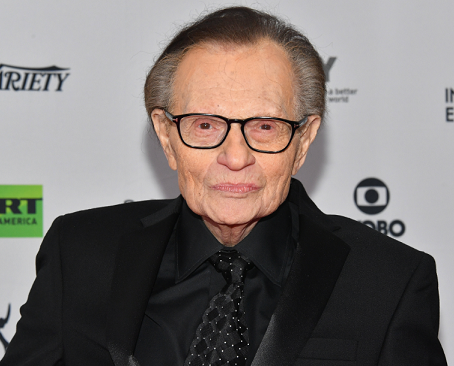 My biggest fear is death because I don't think I'm going anywhere. And since I don't think that, and I don't have a belief... I'm married to someone who has the belief, so she knows she's going somewhere

I remind myself every morning: Nothing I say this day will teach me anything. So if I'm going to learn, I must do it by listening

Larry King is most famous for his late-night talk show Larry King Live, which he hosted for 25 years at CNN news source. King is popular for his commendable interviewing style who has interviewed many of the world’s renowned celebrities that many broadcasters could only dream of.

When he debuted his talk show Larry King Live in June 1985, he reshaped the landscape of broadcast journalism. He is the recipient of several honors, including two Peabodys and ten Cable ACE Awards. During the week, he hosts Larry King Now on Hulu and RT America, and on weekends, he hosts Politicking with Larry King, a weekly political talk show that airs on the same two channels in the evening.

Larry King is well-known for what?

A radio and television host / personality in the United States of America.

Larry King undergoes angioplasty following symptoms of chest pain and is now’recovering’ in the hospital.

Larry King, the long-running talk show host and former CNN interviewer, is recovering in a hospital after a procedure to relieve chest pain, medically known as angina, Ora TV said in a statement.

He was scheduled for an angioplasty but arrived early last Thursday to be treated for chest pain, according to a statement released Monday.

“His physician successfully performed an angioplasty and implanted stents to reopen the 1987 bypass,” the statement said. “He has been in the hospital recovering and is expected to be released shortly. His doctors hope that he will make a complete recovery.”

According to Ora TV, an on-demand digital television network, King’s doctors have confirmed that, contrary to some media reports, he did not suffer a heart attack or go into cardiac arrest.

“Larry is in good spirits and appreciates everyone’s concern. He is expected to return to his shows, ‘Larry King Now’ and ‘PoliticKING with Larry King,’ in the near future “As stated in the statement.

King, 85, has undergone several heart attacks and underwent quintuple bypass surgery in 1987. His medical problems inspired him to found the Larry King Cardiac Foundation, a non-profit organization dedicated to assisting those without health insurance in affording medical treatment.

King started his lengthy broadcasting career as a radio deejay in Miami in the late 1950s.

King was diagnosed with lung cancer in 2017 and successfully treated with surgery.

Larry King was born in what city?

To begin, Larry King was born Lawrence Harvey Zeiger in Brooklyn, New York, United States. He is an American citizen and a member of the white racial community. Scorpio is his zodiac sign. He is the son of garment worker Jennie Gitlitz and restaurant owner Aaron Zeiger.

Larry King attended Lafayette High School in New York. At the age of 44, his father died of heart failure. He lost interest in school as a result of the death of his father.

He worked to support his mother after graduating from Lafayette High School and did not attend college.

When did Larry King decide to try a career as a host?

He began his career in Miami, where he landed his first radio job. Following a few years, King hosted Miami Undercover on WPST-TV Channel 10 in 1960. (now WPLG). He went national in June 1978 with a nightly Mutual Broadcasting System broadcast.

In 1985, he began working for CNN’s Larry King Live show. He has also written a daily newspaper column for USA Today for nearly two decades. And on June 29, 2010, he resigned from his position as host of CNN’s Larry King Live.
In March 2012, King co-founded the production company Ora TV. He has also worked for RT, which recently announced that King would host a new talk show on the network. And he collaborated with Larry King on the Politicking. Larry King is one of the world’s most popular hosts and presenters today.

In 1982 and 1992, he won the Peabody Award for ‘Excellence in Broadcasting’ for his radio and television programs, respectively.

He has received a total of ten CableACE Awards, including those for ‘Best Interviewer’ and ‘Best Talk Show Series.
In 2009, the Radio & Television News Association of Southern California awarded him with the Golden Milk Award for ‘Lifetime Achievement.’

He is the proud 2006 winner of the Los Angeles Press Club’s President’s Award for his impact on media.
In 2007, he received Arizona State University’s Hugh Downs Award for ‘Communication Excellence.’

Who was Larry King’s wife?

Apart from his professional accomplishments, he is well-known for his eight marriages to seven different women: Freda Miller, Annette Kaye, Alene Akins, Mary Francis Stuphin, Sharon Lepore, Julie Alexander, and Shawn Southwick. He was twice married to Alene Akins. He has a total of eight children. His most recent marriage to Shawn Southwick is the only one that has lasted into the double digits.

They, too, recently filed for divorce but have since halted the proceedings. Thus, his personal life lags well behind his thriving professional life in terms of perfection.

He was a devout smoker for the majority of his youth. He suffered a massive heart attack in 1987 and has since undergone a series of operations to correct his heart condition.

He is the author of two books on dealing with heart disease: ‘Mr. King, You’re Having a Heart Attack: How a Heart Attack and Bypass Surgery Changed My Life’ and ‘Taking on Heart Disease: Prominent Celebrities Share How They Conquered the Nation’s #1 Killer and How You Can, Too’.

Larry King never claimed that he would be ‘going anywhere (heaven/hell)’ after he died, regardless of his religious beliefs.

How wealthy is Larry King?

Larry King’s net worth is estimated to be $150 million as of 2019. He is one of America’s wealthiest actors. He has amassed a sizable fortune as a television and radio host. According to some outlets, he earns more than $10,000 a week from thirty-second advertisements connected to his YouTube videos, which have accumulated over a million views.

From 1985 to 2010, he anchored his show Larry King Live on the CNN network, receiving an annual salary of $7 million. He receives a salary of more than $5 million per year from his work. He resides in a $12 million home in Beverly Hills. He owns a range of automobiles from a variety of manufacturers, including:

How tall is Larry King?

Observing his body statistics, King stands a height of 5 foot 9 inches and weighs around 80 kg. Similarly, He has a pair of dark brown eyes and Gray hair color. His other body information was not disclosed yet. in the case of disclosure, we will let you know.

Our contents are created by fans, if you have any problems of Larry King Net Worth, Salary, Relationship Status, Married Date, Age, Height, Ethnicity, Nationality, Weight, mail us at [email protected]