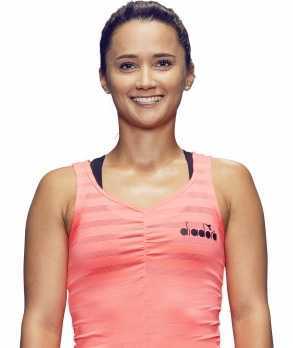 Lauren Davis is an American professional tennis player. Davis turned pro in January 2011. She ranked at world No. 75 in July 2019. She achieved the career-high singles ranking of world No. 26 in May 2017. She won her first WTA title at the ASB Classic in Auckland and has won eight singles titles on the ITF Women’s Circuit.

What is Lauren Davis Famous For?

Where was Lauren Davis Born?

Lauren Davis was born on 9 October 1993. Her birthplace is in Gates Mills, Ohio in the United States. She holds an American nationality. She was born to a father, Bill Davis, and a mother, Traci Davis. Her zodiac sign is Libra. She started playing tennis at the age of 9.

She left her hometown at the age of 16 to train at the Evert Tennis Academy.

She made her junior debut via wild card at the 2008 US Open.

She won her first junior tournament at Grade-3 tournament in Philadelphia, Pennsylvania.

She won her first professional title on clay at a United States Tennis Association tournament in Williamsburg, Virginia in 2010. She was still a junior.

She then went on a 27-match winning streak.

She won her second pro title in Puerto Rico.

She ended her junior career after a third-round appearance at the 2011 Australian Open.

She officially turned pro in 2011.

Initially, she was awarded a wild card into the Australian Open. She lost against Samantha Stosur in the first round.

She won her first WTA match at the Miami Masters qualifiers. She defeated Jill Craybas.

She suffered a concussion during a post-match interview in qualifying for the Charleston Open when lighting equipment fell on her head. The injury kept her out of competition for months. She also suffered from occasional migraines for several months.

Davis filed a lawsuit against Production Design Associates and High Output in October 2013. She sought actual and punitive damages for negligence and gross negligence.

She lost in the first round of the French Open, Wimbledon, and the US Open in 2013.

She achieved her first victory over a top-10 player and a Grand Slam champion defeating world No. 4 Victoria Azarenka in the second round at the BNP Paribas Open in 2014.

She reached her greatest success in a WTA tournament at the time when she reached the semifinals of the ASB Classic.

She reached her first WTA final at the Citi Open in 2016. She lost the final to Yanina Wickmayer.

She reached her career second final at the Coupe Banque Nationale in September. She lost to Oceane Dodin in the final.

She won her first WTA title at the ASB Classic in Auckland. She defeated Ana Konjuh in the final.

She achieved a new career-high of No. 37 in the WTA rankings.

She was also part of the US team that reached the Fed Cup final in 2017, where they defeated the Czech Republic.

Her singles ranking dropped to No. 48 at the end of 2017 after she lost in the first round of all Grand Slam tournaments in 2017.

She defeated Ann Li to win the inaugural ITF FineMark Women’s Pro Tennis Championship in May 2019.

She lost to Carla Suarez Navarro in the third round of 2019 Wimbledon.

Who is Lauren Davis Dating?

Lauren Davis is unmarried. However, she has maintained a low profile regarding her personal life. She might be dating someone. No rumors about her dating have surfaced yet.

How tall is Lauren Davis?

What is Lauren Davis Net Worth?

Lauren Davis earns from her professional tennis career. Her income comes from prize money, bonuses, and endorsements. As of July 2019, she has already won prize money of $2,720,720. Her net worth will be updated soon.

Our contents are created by fans, if you have any problems of Lauren Davis Net Worth, Salary, Relationship Status, Married Date, Age, Height, Ethnicity, Nationality, Weight, mail us at [email protected]