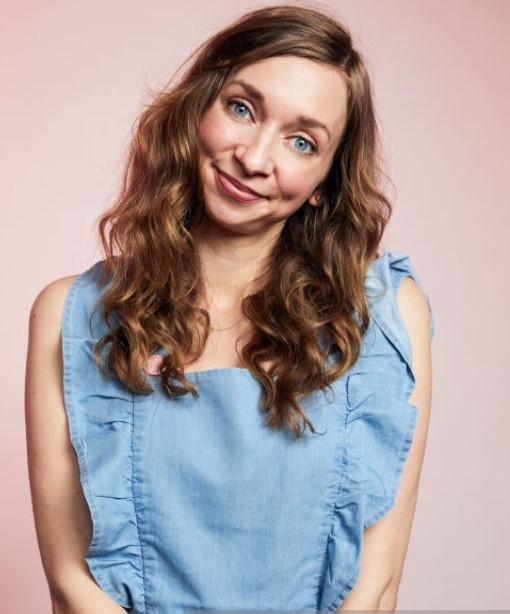 Lauren Lapkus is an American actress, comedian, and impressionist who is best known for portraying Susan Fischer in the Netflix original series, “Orange Is the New Black”(2013). She even won a SAG Award for the first time for her role in the series. She is also popular for her roles in the blockbuster hit movie, “Jurassic World”(2015) as Vivian, and as Jess in the popular HBO series, “Crashing”(2017).

What is Lauren Lapkus Famous for?

Where was Lauren Lapkus Born?

Lauren Lapkus was born on September 6, 1985, in Chicago, Illinois, United States. Her birth name is Dorthea Lauren Allegra Lapkus. Her nationality is American. Lapkus belongs to White ethnicity and is of half Lithuanian and half Greek/Serbian descent while Virgo is her zodiac sign.

Lauren was born in a well-to-do family and was raised in her hometown along with her older brother. She attended Evanston Township High School where she participated in the annual student revue and variety show YAMO. She had an interest in acting since her childhood as during those times, she used to film sketches with her brother.

During her senior year of high school, she even began taking improv classes at the iO Theater. Later, she joined DePaul University and got graduated earning a degree in English in 2008. Soon after her graduation, she moved to New York City for a year where she worked at Upright Citizens Brigade Theatre.

After spending almost 15 months in New York City, she relocated to Los Angeles in 2010. Besides, Lauren grew up watching a lot of television sitcoms and “Saturday Night Live” which she credits for her success as a comedian. After almost a year in Los Angeles, Lapkus got roles in a number of commercials, including “Snickers” and “Jack in the Box”.

Who is Lauren Lapkus Married to?

Lauren Lapkus married twice throughout her life to date. Previously, she was married to her first husband, Chris Alvarado, who is an actor and improviser. Lauren and Chris got married on May 3, 2014, however, after almost 2 years of their marriage, they separated on February 14, 2016.

Two years later her separation, she got married to her second husband, Mike Castle on October 5, 2018. Mike is also an actor who appeared alongside Lauren in the TBS television series, “Clipped”.

How Tall is Lauren Lapkus?

Lauren Lapkus is a beautiful lady in her 30s. Lapkus has a well maintained slim body physique of measurement 32-23-33 inches with 32 A as her bra size and 4(US) as her dress size. She stands tall with a height of 5ft. 10inch.(1.78m) while her body weighs around 55kg(121 lbs). She has a fair complexion with blue eyes and blonde hair.

What is the Net Worth of Lauren Lapkus?

Lauren Lapkus has quite good earnings from her profession as an actress. Lapkus has been working in the show business for over 5 years and has undoubtedly managed to amass a healthy fortune from her movies and TV series. Her net worth is estimated to be around $800k.

Our contents are created by fans, if you have any problems of Lauren Lapkus Net Worth, Salary, Relationship Status, Married Date, Age, Height, Ethnicity, Nationality, Weight, mail us at [email protected]