Lautaro Javier Martinez, professionally known as Lautaro Martinez is an Argentine professional football player. He plays as a striker for the Italian club Internazionale and the Argentine national team. 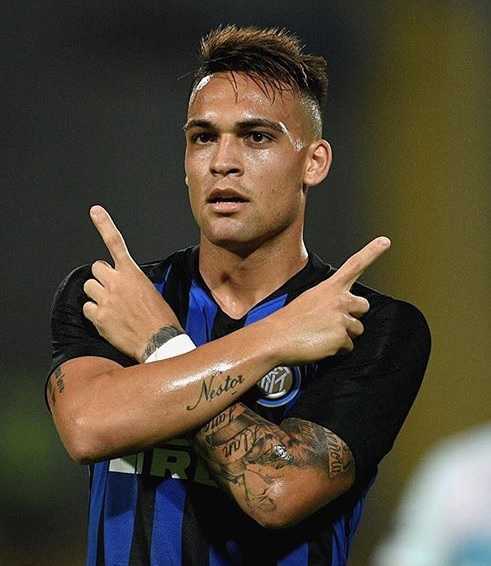 Lautaro Javier Martinez, professionally known as Lautaro Martinez is an Argentine professional football player. He plays as a striker for the Italian club Internazionale and the Argentine national team. He started his youth career at Liniers and made his professional debut at Racing Club in 2015. He represented Argentina’s U20 national team before making his senior international debut in 2018.

What is Lautaro Martinez Famous For?

Where was Lautaro Martinez Born?

Martinez was born on 22 August 1997. His birth name is Lautaro Javier Martinez. His birthplace is in Bahia Blanca in Argentina. He holds Argentine nationality. His zodiac sign is Leo. He was born to a father, Mario Martinez, and a mother, Karina Vanesa Gutierrez. He followed in his father’s footsteps to become a professional football player. He has two siblings, Jano Martinez, and Alan Martinez.

He joined the youth system of Liniers in 2013.

Martinez’s performance caught the attention of Racing Club and was signed by the club in January 2014.

He scored 53 goals in 64 appearances for the club’s reserve side.

Real Madrid and Racing Club signed a deal for Martinez in 2015, but Martinez chose to remain in Argentina.

He made his professional debut in November 2015 against Crucero del Norte.

He was sent off for the first time after picking up two bookings in the space of five minutes against Argentinos in April 2016.

He scored his first professional goal against Huracan in November 2016.

He finished his stint at Racing Club with 27 goals.

Internationale signed a five-year contract with Martinez for 22.7 million Euro in 2018.

He made his league debut for Internazionale against Sassuolo in August 2018.

He scored his debut league goal for the club against Cagliari in September 2018.

He represented Argentina at the 2017 South America Youth Football Championship 2017. He finished the tournament as joint-top scorer with five goals.

He became the first-ever player to be dismissed after a video referral after he lashed out at Fikayo Tomori during Argentina’s match against England at the 2017 FIFA U20 World Cup. He was sent off from the bench.

He made his senior international debut against Spain in March 2018. He came on in as a substitute for Gonzalo Higuain.

He was named in Argentina’s preliminary squad for the 2018 FIFA World Cup in Russia but was omitted from the final squad.

He scored his first senior international goal in a 4-0 friendly win over Iraq in 2018.

He was named to the Argentina squad for the 2019 Copa America.

Who is Lautaro Martinez Dating?

Lautaro Martinez is currently unmarried. He is in a relationship with Agustina Gandolfo.

What are Lautaro Martinez Body Measurements?

What is Lautaro Martinez Net Worth?

Lautaro Martinez earns from his professional football career. His income comes from salary, bonuses, contracts, and endorsements. His net worth is not available at present. It will be updated soon.

Our contents are created by fans, if you have any problems of Lautaro Martinez Net Worth, Salary, Relationship Status, Married Date, Age, Height, Ethnicity, Nationality, Weight, mail us at [email protected]