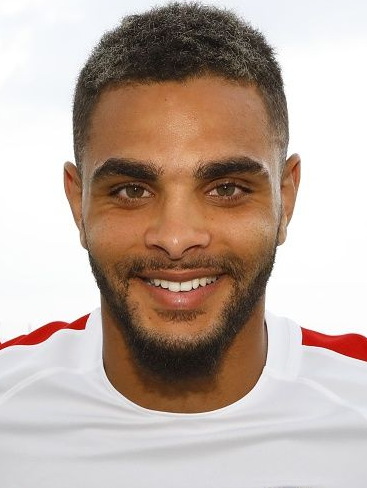 Layvin Kurzawa, a French well known professional footballer who plays for Paris Saint-Germain and the France national team as a left-back. He came into the limelight due to his performance with Paris Saint-Germain. So, he is a very talented, skilled player. His playing position is Left back. Currently, he is playing in Paris Saint-Germain Team. His shirt number is 20. His teammate includes Hugo Lloris, Steve Mandanda, Florian Thauvin, and Paul Pogba.

Layvin Kurzawa was born on 4th September 1992. He was born and raised in Frejus, the city of France. His father is a Guadeloupean and his mother is of Polish descent. He also has a brother named Yrleas Teoro Kurzawa. He belongs to African ethnicity but he holds French nationality.

Layvin Kurzawa came into the field of football at the age of four through the Youth team of Stade in 1996. Later, he played for the youth club of Aix-en-Provence and Monaco. On 22 September 2010, in a Coupe de la Ligue match against Lens at the Stade Louis, he made his professional debut. He appeared in 30 games and scored 5 goals. So, he was included in the squad of Monaco many times since 2010 and scored 6six goals in 75 games. After spending six seasons, he left the club in 2015. He was also a member of the team that won Ligue 2 in 2012-2013.

Later on, he signed a five-year contract with Paris Saint Germain with a transfer fee of €25 Million on the date of 27th August 2015. On 11th September, his first match came against the club, Bordeaux. Now, he has kicked 6 goals in 40 appearances for this team. He has won many awards. Some are Ligue 1 (2015/16), Coupe de la Ligue (2015/17), and many more. Kurzawa scored his first career hat-trick against RSC Anderlecht in the Champions’ League Group Phase on 31 October 2017. Kurzawa became the first defender in modern Champions League history to achieve this feat in the competition. In this way, his early career started.

In 2014, he was called up to his senior team after four years. There, he made his international debut against Albania. He has won 11 caps for his national team by scoring one goal. He had played 8 matches for France U-19, 2 for U-20, and 5 for U-21. On 1st September 2016, Kurzawa scored his first international goal concluding a 3–1 friendly win over Italy at the Stadio San Nicola. He represented his team France in U-19, U-20, and U-21 tournaments.

Layvin Kurzawa might be single. His favorite brand is Nike. He is a tattoo lover. He has a beautiful tattoo on his body. So, he is very popular for his Tattoo that he inked in several parts of the body. His net worth is to be €5 Million and he receives €75,000 as a weekly salary from his current club. His Zodiac Sign is Virgo. He has a height of 1.82 m. He owned a Bentley car and also has Lamborghini Huracan.

Our contents are created by fans, if you have any problems of Layvin Kurzawa Net Worth, Salary, Relationship Status, Married Date, Age, Height, Ethnicity, Nationality, Weight, mail us at [email protected]