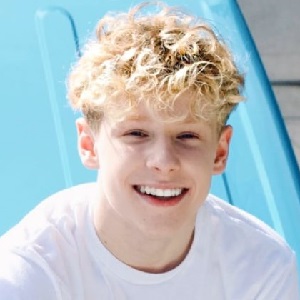 Lev Cameron is an American Dancer, Youtuber, TikTok star, and social media personality. He is best known for his appearance in the dancing series ‘So You Think You Can Dance: The Next Generation’.

Where was Lev Cameron born?

Lev Cameron was born as Lev Cameron Khmelev on October 11, 2005, in French. Later, he moved to the US with his family. His zodiac sign is Libra. He was born to father Alexander and mother Irina Khmelev. As of 2020, he is 15 years old.

Talking about his education, he passed his school level and got the CHSPE certificate. He has now joined the Los Angeles Valley College.

How did Lev Cameron become so famous?

Lev Cameron started dancing since he was five years old. He knows the various style of dancing such as hip-hop, jass, ballet, Latin dance, etc. He joined Millennium Dance Studio and Beverly Hills Ballroom Dance Studio, as to learn dance. In 2015, he appeared in the short film ‘And the Tiara Goes To..’. In 2016, he got famed after participated in the dancing show called ‘So You Think You Can Dance: The Next Generation’. He successfully made it to its Top 30 in that competition. In the same year, he showed up in the music video of Justin Timberlake’s ‘Can’t Stop the Feeling!’.

In 2019, he played in the Comedy-drama movie, Ham on Rye, as a Squirgly Dag. This movie is directed by Tyler Taormina.

Lev started his Youtube channel titled, Lev Cameron, on Jan 2, 2018. He has 1.27 million Subscribers and the channel already has more than 100 million views. According to his channel, he created this channel to share his life experience. His Youtube channel features different kinds of videos including challenges, reactions, pranks, dances, songs, and many more videos.

How tall is Lev Cameron?

He stands at a height of 5 feet and 7 inches. His weight is around 60 kg. He has blue eyes and blonde hair.

What is the Net worth of Lev Cameron?

Is Lev Cameron in a Relationship?

Currently, Lev Cameron is dating Piper Rockelle. Piper is a Tiktok star, Youtuber, model, and dancer too. They also called themselves a Liper. They started to appear together in August 2019. Later, in 2020 Valentine’s Day, Lev asked Piper to be his valentine. After that, they are dating each other.

Our contents are created by fans, if you have any problems of Lev Cameron Net Worth, Salary, Relationship Status, Married Date, Age, Height, Ethnicity, Nationality, Weight, mail us at [email protected]