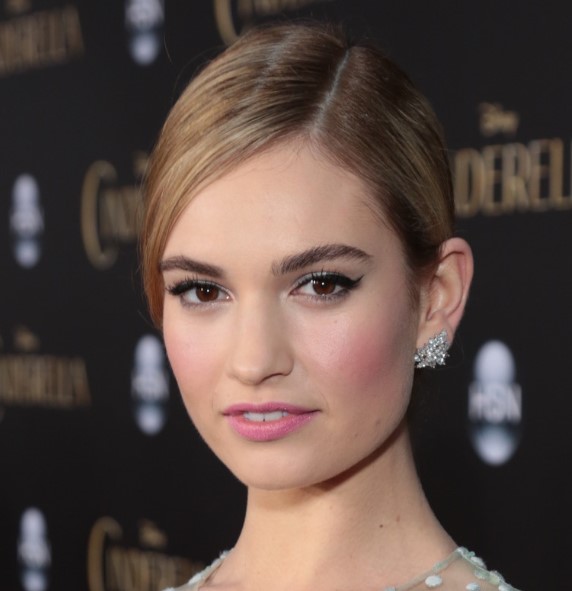 Lily James is an English born actress who is professionally known for her role as Cinderella in the romantic fantasy movie Cinderella in 2015. ‘Just William’ is her debut television series and she played a supporting role in a drama series ‘Downtown Abbey’ from 2012-2015. She played numerous movies and television series in different years such as movies; Wrath of The Titans, Fast Girls, Burnt, Darkest Hour, and more come under her acting movies. About TV series she played Just William, Downton Abbey, and War & Peace, and more. She has also done theatrical plays such as Vernon God Little, Othello, The Seagull, and more. She has won 4 awards Screen Actors Guild for Outstanding Performance by an Ensemble in a Drama Series in Downton Abbey in 2014, won Harper’s Bazaar Women of the Year Awards for Choice Movie Actress: Science Fiction Fantasy Movie for Cinderella in 2015 and more.

What is Lily James famous for?

Lily Chloe Ninette Thomson is her birth name. She took her father’s name as her stage name after the death of her father due to cancer in 2008. She was born on April 5, 1989, in Esher, Surrey, England. She is a citizen of England and holds English Nationality. Her acting was built in her gene. She is the daughter of James “Jamie” Thomson who was a musician and her mother’s name is Ninette Mantle who was an actress.

She has an older brother named Charlie Thomson and younger brother Sam Thomson. She attended Tring Park School and did her graduation from Guildhall School of Music and Drama in London in 2010. She is Aries by her zodiac sign. She is of White Ethnicity and Christianity is her religion.

She has huge fan followers on her social media accounts.

As she has a family background in the world of entertainment, she shows an interest in acting career since childhood and she went to graduate in a School of Music and Drama. After her graduation, she started her career in a television show of ‘Just William’ as Ethel Brown in 2010, which was of 4 episodes which were her debut role in an acting career.

She played another life-changing tv series named Downton Abbey as Lady Rose MacClare from 2012-2015 where she won two awards from that series in 2014 and 2015. The series has 21 episodes and She has won Screen Actors Guild for Outstanding Performance by an Ensemble in a Drama Series for Downton Abbey in 2014 and in 2015.  She played Secret Diary of a Call Girl as Poppy in 2011 which has 8 episodes and She played War & Peace series as Countess Natasha Rostova in 2016 which has 6 episodes. When it comes to big-screen movies she has done tremendous acting and won the awards.

Her debut movie was Chemistry (A short film) as Ines in 2012. In the same year, she played ‘Wrath of the Titans’ as Korrina, ‘Broken’ as Older Skunk, and ‘Fast Girls’ as Lisa Temple. She played another short film as Betty in The Tale of Thomas Burberry in 2016 and as Miranda in One Red Nose Day and a Wedding in 2018.

The movie Cinderella played by Lily James as Cinderella was a romantic fiction movie and big hit all over the world. She played in the role of Cinderella in 2015 and collected the gross profit of $ 542.4M worldwide. She has won the Harper’s Bazaar Women of the Year Awards for Breakthrough Award for Cinderella in 2015.

She played numerous movies in different roles such as ‘Burnt’ in 2015 as Sara, ‘Pride and Prejudice and Zombies’ as Elizabeth Bennet in 2016, ‘The Expectation’ as Mieke de Jong in 2016, ‘Baby Driver’ as Debora in 2017, ‘Darkest Hour’ as Elizabeth Layton in 2017, ‘The Guernsey Literary and Potato Peel Pie Society’ as Juliet Ashton in 2018, as Young Donna Sheridan in ‘Mamma Mia! Here We Go Again’ in 2018 and ‘Yesterday’ as Ellie Appleton in 2019. Movies ‘Rebecca’ as Rebecca de Winter and ‘The Dig’ as Peggy Preston are her upcoming movies in 2020.

She has won four awards from several nominations in various categories in different years.

She won Screen Actors Guild Award for Outstanding Performance by an Ensemble in a Drama Series for Downton Abbey in 2014 and in 2015.

She won Harper’s Bazaar Women of the Year Awards for Breakthrough Awards for Cinderella in 2015.

She won Harper’s Bazaar Women of the Year Awards for Editor’s Choice in 2018.

Who is Lily James Dating?

She has a good name and fame in the world of entertainment with her good looks and acting skills. She is straight to her sexual orientation. She is unmarried but rumored in a relationship with who is a favorite Marvel Superhero. As per the dailymail.co.uk, Lily and Chris were seen together enjoying a night out. They arrived back at the London Hotel, The Corinthia after 1 am but left separately.

She had dated Actor Matt Smith who is known for Dr. Who and The Crown since 2014 and they split in December 2019. It was rumored that they patched up again and were spotted together multiple times since their breakup.

She also dated Jack Fox who is also an English actor and was in relation to a year in 2011.

How tall is Lily James?

What is the net worth of Lily James?

She is an actress who played several movies, tv shows, and theatrical plays in different years and earned a good fortune. Her primary income source is from her acting career. She is one of the popular faces of Hollywood, who played the leady lead in the 2017 action film Baby Driver and romantic fiction movie Cinderella. Her estimated net worth as of 2020 is approx. $5 Million.

Our contents are created by fans, if you have any problems of Lily James Net Worth, Salary, Relationship Status, Married Date, Age, Height, Ethnicity, Nationality, Weight, mail us at [email protected]