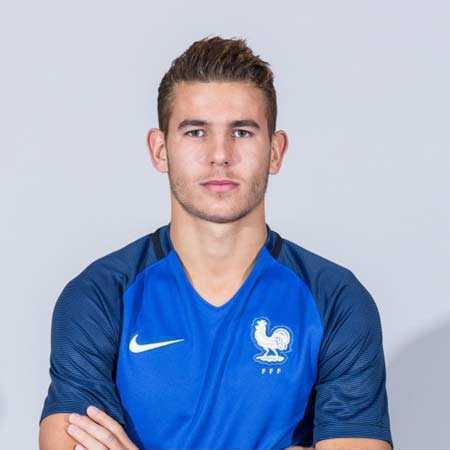 Lucas Francois Bernard Hernandez, aka Lucas Hernandez, is a French international footballer and currently plays for Spanish club Atletico Madrid and the French national team. He plays in a left-back or a central defender position. He wears shirt no 21. He started his youth football from the Spanish club Rayo Majadahonda and started his professional career at Atletico Madrid. Since 2018, he is included in the senior France national team and has also represented France in U-16, U-18, U19, U20, and U-21. He has won UEFA Europa League 2017-18 and UEFA Super Cup 2018 with Atletico Madrid and FIFA World Cup 2018 with France.

Where is Lucas Hernandez from?

Lucas Hernandez was born on 14 February 1996 in Marseille, France under the birth sign Aquarius. Hernandez is French by nationality and as far as his ethnicity is concerned. He is the son of Jean-Francois (a footballer and a center back who also played for Atletico Madrid) and Py Laurence. He has a sibling Theo Hernandez, who is also a footballer currently playing for Real Sociedad loaned by Real Madrid.

In 2014, Lucas started his professional football career with the Atletico Madrid B team in the Segunda Division B. The same year in December, Lucas made his debut for Atletico Madrid senior team.

He was also the part of Atletico Madrid, which reached the 2015-16 UEFA Champions League Final and lost to city rivals Real Madrid. Lucas has a contract extended at Atletico Madrid until 2019.

Initially, Lucas represented France national team at different age levels including France U16, U18, U19, U20, and U21. In March 2018, the manager of France’s national team Didier Deschamps called Lucas to the senior team for friendlies with Colombia and Russia.

Lucas was one of the regular players of the French team that won the 2018 FIFA World Cup in Russia.

The 22-year old central defender, Lucas Hernandez is married to Amelia Ossa Llorente. They got married in 2017. However, Lucas likes to keep his personal life as private as possible. Earlier in February 2017, while they were dating, Hernandez was arrested on the accusation of assaulting his girlfriend. Whereas, he claimed that his girlfriend fell accidentally after a heated argument. As per El Pais, he returned home drunk and got involved in an argument with his then-girlfriend. Later, she was taken to the hospital and treated for minor injuries.

The young defender Lucas Hernandez stands 1.83m tall ie six feet. He has a bodyweight of 76 kg. He is young and has maintained his body perfectly fit.

Net Worth of Lucas Hernandez

Our contents are created by fans, if you have any problems of Lucas Hernandez Net Worth, Salary, Relationship Status, Married Date, Age, Height, Ethnicity, Nationality, Weight, mail us at [email protected]