Mahershala Ali is an American actor and former rapper who is the recipient of several accolades, including two Academy Awards, three Screen Actors Guild Awards, a BAFTA award, a Golden Globe Award and a Primetime Emmy Award. 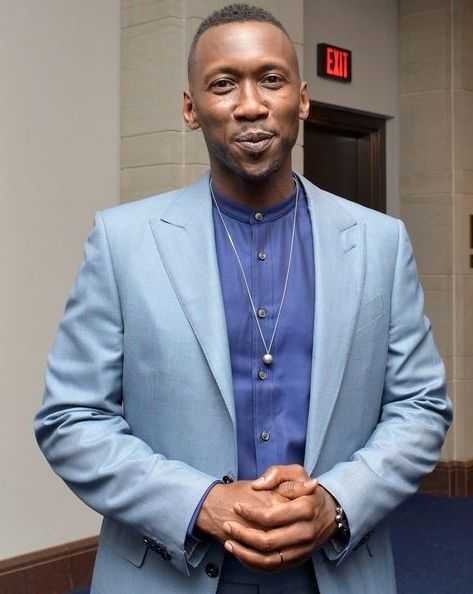 I always hope to be a better person tomorrow than today

To really be conscious of how long the journey is, be patient, push yourself, persevere and always be working on your craft while waiting for your break.

Mahershalalhashbaz Gilmore, popularly known as Mahershalalhasbaz Ali or simply Mahershala Ali is an American actor and rapper. He rose to prominence after he was cast as Richard Tyler in the science fiction series, The 4400. He is best known for his roles in Moonlight and Green Book. He is the recipient of two Academy Awards and a Golden Globe Award.

What Is Mahershala Ali Famous For?

– The first black actor to win two Academy Awards in the same category.

Where Was Mahershala Ali Born?

Mahershala Ali was born on 16 February 1974. His birth name is Mahershalalhashbaz Gilmore. His birthplace is in Hayward, California in the United States. He holds an American nationality. He was born to a father, Phillip Gilmore, and a mother, Willicia Goines. His zodiac sign is Aquarius. He belongs to the Black ethnicity.

He attended St. Mary’s College of California (SMC) in Moraga, California in a basketball scholarship. He was a prominent basketball player then. He graduated with a degree in mass communication from SMC in 1996. His interest in acting started after taking part in a staging of Spunk. He later enrolled in New York University’s Tisch School of the Arts, where he received his MFA degree in 2000.

He made his television debut as series regular as Dr. Trey Sanders in an American television crime drama series, Crossing Jordan in 2001.

His breakthrough role is Richard Tyler on the science fiction television series, The 4400. He appeared on the series from 2004 until 2007.

He had a major role as Remy Danton is an American political thriller web tv series, House of Cards from 2013 to 2016.

He also had the major lead role as a troubled police officer in the third season of the HBO anthology crime series, True Detective in 2019.

He also had major roles in the science fiction dramatic tv series, Alphas, and tv drama series, Treme in 2011.

He has appeared in minor/guest roles in Lie to Me, Law & Order: Special Victims Unit, All Signs to Death, Lights Out, Alcatraz, Marvel’s Luke Cage, Comrade Detective, and Room 104 among others.

He made his film debut in an American independent comedy film, Making Revolution in 2003.

His first major film was the 2008 fantasy film, The Curious Case of Benjamin Button.

His other major films are the final two parts of The Hunger Games series, Mockingjay part 1 and 2, Moonlight, and Green Book.

He won two Academy Awards for Best Supporting Actor for his work in Moonlight and Green Book.

His other films are Crossing Over, Predators, The Place Beyond the Pines, Go for Sisters, Supremacy, Kicks, Free State of Jones, Hidden Figures, Roxanne Roxanne, and Alita: Battle Angel among others.

He had voice roles in the computer-animated superhero film, Spider-Man: Into the Spider-Verse.

He will play the supernatural superhero Blade in a future Marvel Cinematic Universe adaptation of the character. It was announced at the annual San Diego Comic-Con in July 2019.

He recorded rap music as Prince Ali in the 2000s.

He was signed to Bay Area recording label Hieroglyphics Imperium.

He released his album, Curb Side Service in 2007.

He later chose to focus on his acting career.

He has won several awards in his career. Some of his major awards are,

2017 Screen Actors Guild Award – Outstanding Performance by a Male Actor in a Supporting Role in a Motion Picture for Moonlight.

2017 Screen Actors Guild Award – Outstanding Performance by an Ensemble in a Motion Picture for Hidden Figures.

2019 Screen Actors Guild Award – Outstanding Performance by a Male Actor in a Supporting Role in a Motion Picture for Green Book.

Who is Mahershala Ali Married To?

Mahershala Ali is a married man. He is married to an actress and musician Amatus-Sami-Karim. They got married in 2013. The couple welcomed their first child, a daughter in 2017.

How Tall Is Mahershala Ali?

Mahershala Ali stands at a height of 1.87 m i.e 6 feet and 1 and a half-inch tall. He has a bodyweight of 187 lbs i.e. 85 kg. He has an athletic body build. He has a chest size of 44 inches, a biceps size of 16 inches, and a waist size of 34 inches. He has dark brown eyes and his hair color is dark brown as well. He keeps his hair short-trimmed.

What Is Mahershala Ali Net Worth?

Mahershala Ali earns from his acting career. He has already established himself as one of the prominent actors in the Hollywood industry. He has thus appeared in numerous big hit movies and television series. His net worth is estimated at $8 million at present.

Our contents are created by fans, if you have any problems of Mahershala Ali Net Worth, Salary, Relationship Status, Married Date, Age, Height, Ethnicity, Nationality, Weight, mail us at [email protected]