Maisie Williams is an English actress. 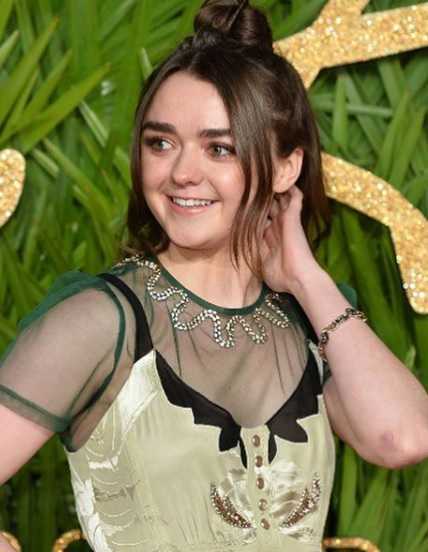 Margaret Constance Williams, popular by the name Maisie Williams is an English actress. She is best known for her role of a tomboyish young girl, Arya Stark of Winterfell in the HBO fantasy television series Game of Thrones since 2011. The role of Arya Stark was also her acting debut. Her role as Arya Stark has won her several accolades and nominations. She has won Portal Award, EWwy Award, Saturn Award, and Empire Awards.

She has also appeared in several films including, Heatstroke, Gold, The Falling, The Book of Love, iBoy, Mary Shelley.

Game of Thrones star, Maisie Williams will star in the thriller, The Owners

Maisie Williams, 21, is set to star in the 1990s thriller, The Owners. It is based on the comic book by Herrmann, written by Yves H. The thriller film will be directed by Julius Berg from a screenplay by Berg and Matthieu Gompel. The Owners will mark Berg as his feature directorial debut.

The film is produced by Alain de la Mata at U.K.-based Bluelight. XYZ Films will be executive producer and handle North American sales with Versatile handling International at the European Film Market at the Berlin Film Festival.

The film will go on the floor this spring in an isolated Victorian mansion in Kent, near London.

After wrapping up the final season of the HBO fantasy television series, Game of Thrones, Maisie Williams has a busy schedule in 2019. Her films, teen drama, Then Came You and horror film, The New Mutants is set to release in 2019.

– Her role as Arya Stark of Winterfell in the HBO fantasy television series, Game of Thrones.

Maisie Williams was born on 15 April 1997. Her birth name is Margaret Constance Williams. She was born to Hilary Pitt. The information about her father is unavailable. She belongs to White ethnicity. Her birthplace is in Bristol, England. She holds English nationality. Her zodiac sign is Aries. She has 3 siblings, James, Beth, and Ted. She is the youngest child. She grew up in Clutton, Somerset.

Maisie Williams made her professional acting debut as Arya Stark in Game of Thrones in 2011.

Before she landed the role of Arya Stark, she competed with 300 actresses across England for the role.

She has received several critical acclaims for her performance in the Game of Thrones.

The final season of Game of Thrones is set to premiere in April 2019 and she has already announced in July 2018 that her role in the series has completed.

In 2012, she played the role of Loren Caleigh in the BBC series, The Secret of Crickley Hall.

She has also appeared in few episodes of the television shows, Robot Chicken and Doctor Who.

She made her feature film debut in the 2015 film, The Falling.

She also appeared in YouTube cooking web series, Bringing with Babish in 2018.

In June 2018, it was announced that she would star in an upcoming stage play, I and You. The play was premiered in October 2018 at the Hampstead Theatre in London.

In August 2018, it was announced that she has joined the voice cast on gen: LOCK animated series on the Rooster Teeth subscription service, where she will play a mischievous Scottish hacker, Cammie MacLoud.

She will star as Wolfsbane in the 2019 superhero film, The New Mutants.

She will star as a teenager with a terminal illness in the teen drama, Then Came You. The movie also stars Asa Butterfield and Nina Dobrev and will release later in 2019.

She launched a new social media app, Daisie alongside Dom Santry in August 2018.

They two also founded the film production company, Daisy Chain Productions to bring creatives across industries together, help foster collaboration with other artists and provide an alternative route into creative industries.

She is the youngest actress ever to win in the Best Supporting Actress category at 2012 Portal Award for her performance in Game of Thrones. She was 15-years old then. She also won the 2012 Portal Award Best Young Actor.

She won the 2014 EWwy Award for Best Supporting Actress, Drama for her performance in Game of Thrones.

She won Empire Hero Award, Saturn Best Performance by a Young Actor in a Television Series for her performance in Game of Thrones in 2015.

She has won Young British/Irish Performer of The Year at London Film Critics’ Circle Award and Rising Star Award at Evening Standard British Film Award for her performance in The Falling in 2016.

Maisie Williams was rumored to be dating YouTuber Caspar Lee. Since 2014, the two were seen together on several occasions. Maisie has appeared in Lee’s video, “Bedroom Advice”. However, neither of them has ever made an official announcement about their affairs. She has maintained her personal life private.

As of 2019, the net worth of Game of Thrones star is estimated at around $6 million. She earned her fortune mostly from her debut Television series, Game of Thrones. Besides, she has also appeared in other television shows and films.

She has appeared in the Converse video clip, Forever Chuck in 2017. She and Dom Santry launched a social media app, Daisie in August 2018.

Our contents are created by fans, if you have any problems of Maisie Williams Net Worth, Salary, Relationship Status, Married Date, Age, Height, Ethnicity, Nationality, Weight, mail us at [email protected]