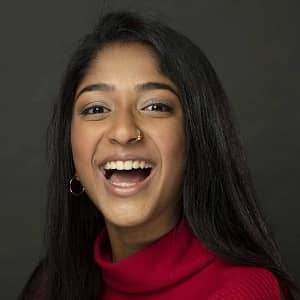 Maitreyi Ramakrishnan is a Canadian actress. She is famous for her portrayal of the lead character of Devi Vishwakumar in the Netflix teen comedy series, ‘Never Have I Ever’ (2020).

How old is Maitreyi Ramakrishnan?

Maitreyi Ramakrishnan was born on 28 December 2001, in Mississauga, Ontario. As of 2020, her age is 18. She was born to parents Ram Selvarajah (father) and Kiruthiha Kulendiren (mother). She also has a brother named Vishwa.

Her family came to Canada as refugees after the Sri Lankan civil war. Although she is of Hindu Tamil descent, she refuses to identify herself as Srilankan and says she is Tamil Canadian. Ramakrishnan started acting in school plays in Grade 10.

How did Ramakrishnan pursue her career?

Ramakrishnan decided to become a professional actress when she was in the last year of her school. Just a year after deciding to become an actress, Maitreyi landed the role that would change her life forever.

She landed the lead role of Devi Vishwakumar in the Netflix series, ‘Never Have I Ever’. In 2019, Mindy Kaling, the creator of the show chose her out of 15k candidates who applied for an open casting. As the first real role of her life, to audition, she created the tape at a local library, using her mother’s camera. The show creators eventually asked her to send four more videos and she qualified for a screen test in LA before finally landing the role at the age of 17.

The casting received significant media attention because of her Tamil Canadian ethnicity. Proving a lot of people wrong, Maitreyi’s performance was critically acclaimed. The show premiered on May 21, 2020, and is about an Indian American high school student (Devi) dealing with the death of her father to great critical acclaim.

In 2019, Today included Rama in their list of ‘Groundbreakers’. Variety described her performance as a ‘breakout performance’. In 2020, she appeared as Olivia in an episode of ‘Acting for a Cause’.

What is the Net Worth of Maitreyi Ramakrishnan?

Maitreyi Ramakrishnan has an estimated net worth of around $100k as of 2020. Her main source of income is acting. She has just started her career and is still in her teenage years, so she is expected to earn more with more roles in the coming years.

How tall is Maitreyi Ramakrishnan?

Maitreyi Ramakrishnan stands at a height of 5 feet 6 inches and weighs around 60 Kg. Her body measurements for breasts, waist, and hips are 34-26-35 inches. Her hair color is black and her eyes are dark brown in color.

Is Maitreyi dating anyone?

Maitreyi Ramakrishnan is currently single. She is not dating anyone and has not revealed any of her previous relationships. Currently, she seems focused on her acting career and her social media profiles also don’t point out any hints on her relationship status.

The young and talented actress is active and very popular on social media sites. She has over 3.7k followers on Facebook and around 40.8k followers on Twitter. Moreover, her Instagram account has over 1.2 million followers.

Our contents are created by fans, if you have any problems of Maitreyi Ramakrishnan Net Worth, Salary, Relationship Status, Married Date, Age, Height, Ethnicity, Nationality, Weight, mail us at [email protected]