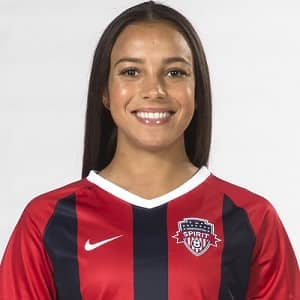 Mallory Pugh is an international professional soccer player from America. She is most famous for playing in the Washington Spirit football club and the United States national soccer team. Her playing position is forward and is an important women’s footballer of this US team.

How old is Mallory Pugh?

Mallory Pugh was born on April 29, 1998, in Littleton, Colorado. She is American by nationality and is currently 22 years old.

Talking about her family, she comes from a football background as her parents hail from an athletic background as well. Her mother, Karen Pugh was a long-distance runner, while father, Horace Pugh played football. Mallory grew up along older sister Brianna whom she appraises as a role model. According to her, it was her sister, who inspired Pugh towards her soccer career.

How is the professional life of Mallory Pugh?

Professionally speaking, Mallory Pugh has come a long way to become an international football player. As of now, she plays for the team Washington Spirit of the National Women’s Soccer League as a forward. Likewise, she is also included on the women’s national team of the United States.

Before her rank, she has played in different age group teams such as U-17 and U-20, representing the States. She was just 17 when she received the first call from the senior team in 2016. She even was the youngest player to be called for the national team at the time as well. Mallory made her debut with the game against Ireland, as a substitute for Alex Morgan in the 58th minute of the game

Furthermore, Pugh began the game against Sweden on August 12 in the semifinals in the 2016 summer Olympics. The game ended in a 1–1 tie and Lindsey Horan replaced Pugh in extra time in the 114th minute.

Physically, it is no doubt that she has maintained a pretty athletic body throughout the time she has spent on the training ground. She stands with a height of 5 feet 4 inches and weighs about 54 kilograms. Despite her short height, it’s pretty difficult to tell when she’s dominating the game with her power and ability. Likewise, Mal Pugh has brown hair a pair of brown eyes which just compliments her beauty even more.

How much net worth does Mallory hold?

Mal Pugh is a growing player and has amassed a lot of fame and wealth that many older players can only dream of. According to several media sites, she has an estimated net worth of around $1 million and her earnings are expected to rise significantly as her career trudges ahead. Her speed and agility give us enough reason to claim her salary to be around $40,000 as the average income of players in NWSL is between $16,538-$46,200.

Is Mallory Pugh dating anybody?

Talking about the dating life of Mallory, she is not married yet but she is in a romantic relationship with her boyfriend Dansby Swanson. Despite such a great time together, the couple hasn’t planned of getting married yet. Currently, there is no information on how and when they started dating. According to several rumors, the couple met through one of their mutual friends.

Socially, Mallory Pugh is seen quite active on several media sites such as Instagram, Twitter, and Facebook. She is available on Instagram under the username @malpugh and is a verified user as well. The account has amassed more than 540K followers to date. Similarly, her Twitter handle is @MalPugh with over 113.2 K followers, she joined the platform in June 2012. Her official Facebook profile has over 49.6 K followers.

Our contents are created by fans, if you have any problems of Mallory Pugh Net Worth, Salary, Relationship Status, Married Date, Age, Height, Ethnicity, Nationality, Weight, mail us at [email protected]