Marcus Ardel Taulauniu Mariota is an American football quarterback for the Las Vegas Raiders of the National Football League. He was drafted by the Tennessee Titans second overall in the 2015 NFL Draft. 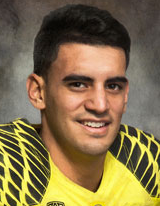 Marcus Ardel Taulauniu Mariota shortly named Marcus Mariota is an American football quarterback. He is playing for the Tennessee Titans of the National Football League (NFL) at present. He was drafted by the Titans second overall in the 2015 NFL Draft. He played college football at Oregon and as a junior, he became the first University of Oregon player, as well as the first Hawaii-born athlete, to win the Heisman Trophy.

Earlier this week the Tennessee Titans announced that former Oregon Heisman winning quarterback Marcus Mariota would be benched in favor of starting Ryan Tannehill. The Benching game after Mariota was pulled in last week’s shutout loss to the Denver Broncos. Speaking with the media earlier this week, he said that being benched won’t define or end his career. “For me, my expectation was always to be the best player I could be for this team,” he said to the Tennessee media. “And, until the day that I die, I’m going to believe I gave it all I got. No matter what, I can learn and grow from this situation. This isn’t going to bring me down. This isn’t going to end my career. This is an opportunity for me to grow. And I’m going to make the most of it.” On the 2019 regular season, he has gone 2-4 in six games. He has completed 94 of 159 passes (59.1 percent) for 1,179 yards and seven touchdowns to two interceptions. Tannehill, meanwhile, has appeared in two games and flashed off the bench. He has gone 13 of 16 (81.3 percent) for 144 yards, but remains without a touchdown and carries one interception with him.

On 30th October 1993, Marcus was born in Honolulu, Hawaii. His full name is Marcus Ardel Tafuna Taulauniu Mariota. He was born to Alana Deppe-Mariota and Toa Mariota. He holds an American nationality and is of multiracial by his ethnicity. His horoscope sign is Scorpio. He has a younger brother named, Matt Mariota. His religion is Christian. As of 2018, he celebrated his 25th birthday with his friends and families. He attneded Saint Louis School where he was a dual-sports star in track and football. Later, he attended the University of Oregon. In football, he was relatively unknown until late in his high school career due to not starting until his senior season. In his senior years, he earned several awards and honors including HHSAA Division 1 State Football Championship, Interscholastic League of Honolulu Offensive Player of the Year, PrepStar Magazine All-West Region and Hawaii Gatorade Player of the Year.

Marcus is a very elegent person with charming and glowing face. With his playing skills and attractive personality, he attracts a lot of people towards him. With the balanced weight of 222 lb or 101 Kg, he stands at the perfect and tall height of six feet four inches. He has got a great body. His other body measurements, as well as his other body details, has not been revealed by him. He maintained his body a lot by doing exercises and by maintaining diet. His body build is Athletic.

It is always interesting to discuss the relationship details of football players. Marcus is not married yet but he is in a relationship with his college girlfriend named Kiyomi Cook. Their relationship became public a year later after they spotted together in Mariota’s NFL Draft Party in 2015 in Honolulu, Hawaii. The couple met in 2014 while attending the University of Oregon and reported to be dating since then. Kiyomi studied human physiology and earned a bachelor of science degree at the age of 20. As of today, the couple is residing in Nashville. As of today, the couple is living a happy life without any disturbances. The duo is planning to get married soon.

The net worth of this famous footballer will be surely in millions. As of some sources, his net worth is estimated to have $6 Million as of 2019. He made all his wealth on his own hard work and dedication. He earned it all by himself and he deserves all of it. He was made 4-year contract at $24,213,974 with the Tennessee Titans, including the $15,870,164 signing bonus, $24,213,974 guaranteed and the annual salary of $6,053,494. His major source of earning is from his football career. Beside this, he is also making money from various endorsements. His significant deal includes one of the largest footwear manufacturing company Nike, signed in 2015. He also owns 942 square feet classy penthouse in 600 12th Ave S Apt 2206 Nashville, TN 37203, worth $1.05 million. He purchased the house back in 2015. Overall, he is living a luxurious lifestyle from his earnings.

Our contents are created by fans, if you have any problems of Marcus Mariota Net Worth, Salary, Relationship Status, Married Date, Age, Height, Ethnicity, Nationality, Weight, mail us at [email protected]