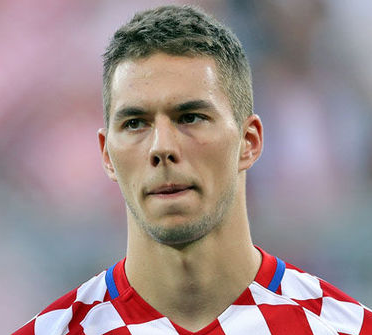 Marko Pjaca is a Croatian professional footballer who plays as a winger for Italian club Juventus, and the Croatia national team. His shirt number is 22. His teammates are Dominik Livakovic, Ivan Strinic, Vedran Corluka, Luka Modric, Milan Badelj, Ivan Perisic, Mateo Kovacic, and so on. He is famous for his outstanding performance in his professional life. Before playing football, he was famous for tennis, handball, and basketball.

Marko Pjaca is born on 6 May 1995 in Zagreb, Croatia. He is a passionate and enthusiastic player. His father’s name is Zeljko Pjaca who was a wrestler and his mother’s name is Visnja Pjaca who was a judoka. He has two elder sisters named Martina and Eva. His nationality is Croatian and his ethnicity is white. His birth sign is Taurus. He began his professional career at Lokomotiva in 2012.

Talking about Marko’s body, his height is 1.86 m. His weight is 83 Kg. His eye color is Brown and his hair color is also brown. He has a balanced body with good health.

Pjaca began his professional career with Lokomotiva. He made his debut in 2011-2012 Croatian First Football League on 24 February. He ended the 2012-2013 Prva HNL season with 2 goals on 17 appearances.  Altogether he made 31 appearances and scored 7 times.

Pjaca was signed by Croatian First Football League Champions Dinamo Zagreb. He made his debut in the opening match. He was in the 2014-2015 UEFA Europa League group stage. He finished the season with 14 goals in 47 appearances. He was also in the 2015 Croatian Football Cup Final and 2016-2017 UEFA Champions League second qualifying round.

Pjaca signed a five-year contract with Juventus. He became the most expensive sale player of Dinamo and Croatian First Football League. he made his debut on 27 August. In October he suffered from an injury and he missed the seasons. He again returned in January 2017 and gave the appearance. He scored his first goal on the Champions round of 16.

Pjaca joined German club Schalke on 4 January 2018 on a loan without an option to buy until the end of the season of 2017-2018. He was in the UEFA Champions League. he made his official club debut on 13 January. He scored his first goal on his second appearance.

Pjaca made his international debut on 4 September 2014. He made his competitive debut in UEFA Euro 2016 qualifying match. He was also included in Croatia’s Euro 2016 squad.

Pjaca also has represented Croatia in the 2018 FIFA World Cup. He has given his outstanding performance in the match.

Pjaca is neither married nor single. Recently he is in a relationship with his stunning girlfriend named Marija Pavacic who is a physiotherapist by profession. They are a happy couple and have a mutual understanding.

Pjaca’s net worth is estimated to be $8 Million. He earns a salary of $1.5 Million. His earning sources are the National team and club Schalke.

Our contents are created by fans, if you have any problems of Marko Pjaca Net Worth, Salary, Relationship Status, Married Date, Age, Height, Ethnicity, Nationality, Weight, mail us at [email protected]