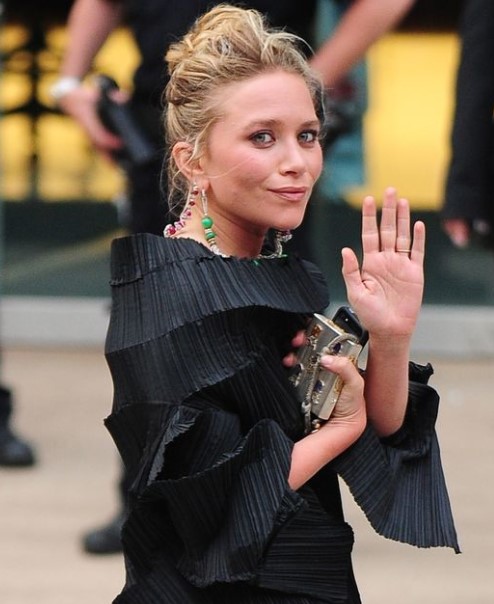 Mary-Kate Olsen is an American fashion designer, former actress, and producer, who is best known for her appearance as Michelle Tanner along with her fraternal twin sister Ashley Olsen when they were just 9 months old in the ABC sitcom, “Full House”. Along with her twin sister, Ashley Olsen, Mary has formed a great reputation and establishment of their niche in the show business as they currently are the owners and founders of the luxury fashion brands, “The Row” and “Elizabeth and James”.

Mary and her sister, Ashley officially retired as actresses and began focusing in the fashion industry in 2012. Olsen twins have a combined net worth of $500 million as of 2019 and were even ranked as the eleventh-richest women in entertainment in 2007.

What is Mary-Kate Olsen Famous for?

Where was Mary-Kate Olsen Born?

Mary-Kate Olsen was born on June 13, 1986, in Sherman Oaks, California, United States. Her birth name is Mary-Kate Olsen. Her nationality is American. Olsen belongs to White ethnicity while Gemini is her zodiac sign.

Mary-Kate was born as a twin child to a well-to-do family to Jarnette ‘Jarnie’ Olsen(mother) and David ‘Dave’ Olsen(father). Her mother was a personal manager, while her father worked as a real estate developer and mortgage banker. However, after 10 years of their birth, their parents divorced in 1996.

Her twin sister is Ashley Olsen together known as “Olsen sisters” with whom she started her career at a very early age when they were just 9 months old. Mary also has two other siblings other than her twin, an older brother, Trent, and a younger sister, Elizabeth Olsen, who is also a popular actress known for her role as Scarlet Witch in superhero films set in the Marvel Cinematic Universe. She also has two half-siblings, Taylor and Jake, from her father’s second marriage.

She attended Campbell Hall School in Los Angeles and later then attended New York University’s Gallatin School of Individualized Study with her sister Ashley in 2004. Besides, Mary-Kate began horseback riding since the age of 6 and during her school, she was also a member of the school’s equestrian team. She even competed at The American Gold Cup in upstate New York in 2016.

Mary-Kate has won several awards which are all combined with her twin sister, Ashley Olsen.

Who is Mary-Kate Olsen Married to?

Mary-Kate Olsen has married for once to her first husband, Olivier Sarkozy. Olivier is a French banker and half brother of former French President Nicolas Sarkozy with whom she began dating since May 2012. The couple dated for several months until they got engaged in 2014 as a photo was published showing supposedly an engagement ring.

After 3 years of dating, the couple got married on November 27, 2015, at a private residence in New York City. However, Olsen filed for a divorce and even sought an emergency order to proceed despite delays due to the COVID-19 pandemic on April 17, 2020. The divorce issue got messier after Sarkozy’s team forced Olsen to be out of the couple’s shared apartment by May 18, 2020.

Besides, Olsen had even undergone treatment for anorexia nervosa and was also hospitalized for a reported kidney infection on November 20, 2007. Also, the Olsen twins have been constantly supporting charitable organizations and NGOs.

In 2004, they made headlines after they allow the workers of Bangladesh to work in their line of clothing. In 2011, Mary-Kate and Ashley designed an ‘Olsenboye Change Purse’ and donated the money to Pennies From Heaven.

How Tall is Mary-Kate Olsen?

Mary-Kate Olsen is a gorgeous lady in her 30s. With her well maintained slim body physique and sparkling blue eyes, she and her twin sister, Ashley has won several hearts all over the world. She stands tall with a height of 5ft. 2inch.(1.57m) while her body weighs around 49kg(108 lbs).

What is the Net Worth of Mary-Kate Olsen?

Mary-Kate Olsen has whopping earnings from her professional career as a former actress and fashion designer. Working in the show business along with her twin, Ashley since 9 months of their birth, they have managed to earn massive earnings in million worth, turning them into a multi-millionaire.

Olsen twins started off making around $2,400 per episode for their appearance in “Full House”. The salary later grew exponentially over the years, increasing to $25,000 per episode until their paycheck reached upwards of $80,000 per episode.

In 2007, the twins were ranked as the 11th richest woman in the entertainment industry with their combined net worth $100 million by Forbes at the time. It was especially from their fashion business as they had their different company one of them which was the retail group, Dualstar Entertainment, which reportedly has a massive net worth of around $1 billion worth of merchandise in stores and online.

In recent years, their net worth has increased exponentially with the success of “The Row” as it generates around $100 million and $200 million per year in sales, as of 2019 according to Business of Fashion.

Meanwhile, their other brand “Elizabeth and James” adds onto that salary, with an estimated revenue of $89 million per year. Besides, Mary-Kate built a real estate empire with her ex-husband, Olivier Sarkozy. They even have owned several New York City townhouses, including one worth $6.5 million(which they listed for $8.3 million) and another worth $7.7 million.

Adding all of their earnings, Mary-Kate and her twin, Ashley has a whopping net worth of $500 million, and Mary’s alone is $250 million.

Our contents are created by fans, if you have any problems of Mary-Kate Olsen Net Worth, Salary, Relationship Status, Married Date, Age, Height, Ethnicity, Nationality, Weight, mail us at [email protected]