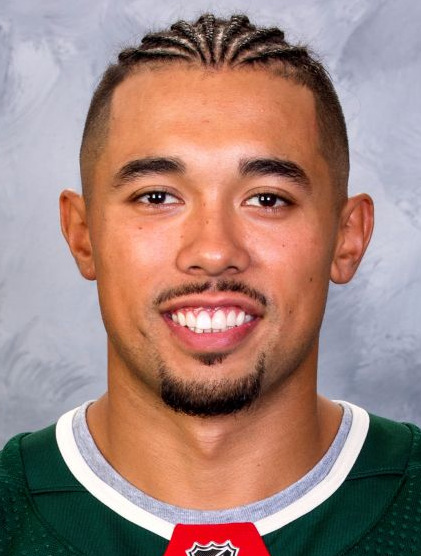 A Canadian ice hockey player is popularly known as Matt Dumba. His playing position is Defence and he shoots right. He is playing for the current team, Minnesota Wild of the NHL. He was selected with the seventh overall pick in the first round of the 2012 NHL Entry Draft. Whereas, he played major-junior hockey with the Red Deer Rebels and won the Jim Piggott Memorial Trophy in 2011 as the WHL’s top rookie. Moreover, he has also played for the Portland Winterhawks of the Western Hockey League (WHL). On 8th June 2020, he became an inaugural executive board member the Hockey Diversity Alliance, whose goal is to address intolerance and racism in hockey. His shirt number is 24 for the team, Minnesota Wild.

Matt Dumba, the first NHL player to kneel during US National Anthem

Matt Dumba became the very first National Hockey League player to kneel during the US National Anthem on Saturday (1st August 2020) in the game between Edmonton Oilers and Chicago Blackhawks while wearing a Hockey Diversity Alliance hoodie with “Black Lives Matter” written on the sleeves. Dumba, who is Canadian, stood for the Canadian anthem. “For those unaffected by systemic racism, or unaware, I’m sure that some of you believe this topic has garnered too much attention during the last couple of months. But let me assure you, it has not,” Dumba said prior to kneeling. “Racism is everywhere and we need to fight against it.” “I know first-hand, as a minority playing of the great game of hockey, the unexplainable and difficult challenges that come with it,” Dumba said. “Black Lives Matter. Breonna Taylor’s life matters,” Dumba said. Additionally, he also joins a long list of athletes, including LeBron James, Tiger Woods, and Kareem Abdul-Jabbar, speaking out about police brutality and the fight for Black lives.

What is the birthplace of Matt Dumba?

On 25th July 1994, Matt Dumba was born as Matthew Dumba. He was born in Regina, Saskatchewan, Canada, and learned to skate at age three. His nationality is Canadian and his ethnicity is Mixed. His race is White. He was born to his parents; Treena Dumba and Charles Dumba. He is of Filipino (maternal) and Romanian and German (paternal) descent. His family moved to Calgary, Alberta, where he played his minor hockey in Calgary with the Crowchild Minor Hockey Association. He spent the 2009-2010 season with the Edge School for Athletes in the Canadian Sport School Hockey League. He won a bronze medal at the 2012 World U18 Championships. As of 2020, he celebrated his 26th birthday. His birth sign is Leo and he is Christian by religion.

How was the Career of Matt Dumba?

What are the Awards and Achievements earned by Matt Dumba?

Talking about the awards and achievements made by Matt Dumba, he won Jim Piggott Memoria Trophy (Rookie of the Year) as of 2010-2011 season.

Who is Matt Dumba Dating?

Matt Dumba’s marital status is unmarried as he is not married yet and he is still to get married. But he is not single as well. He is currently in a relationship. He is dating his pretty girlfriend, Courtney Kreway. He is enjoying his life a lot with his girlfriend. The duo is planning to get married soon. There is no details regarding his past relationship and affairs. Regarding the sexual orientation of Matt, he is straight.

What is the Net Worth of Matt Dumba?

Matt Duba is a professional ice hockey defenceman whose major source of earning is from an ice hockey career. He is satisfied with whatever he is receiving as of now from his career. On 21st July 2018, he signed a five-year, $30 million contract extension with the Wild, carrying an annual average of $6 million. His salary from his team, Minnesota Wild is $6,000,000 as of 2020. As of 2020, the net worth of Matt Dumba is $8 Million. He has also done endorsements deals and sponsorships which also boost up his income. He is living a luxurious lifestyle at present.

How tall is Matt Dumba?

Matt Dumba is a very handsome hockey player with a fair skin tone. With an athletic body build, Matt Dumba stands at the tall height of 6 ft or 183 cm with a balanced bodyweight of 183 lbs or 83 Kg. Overall, he has got perfect body measurements matching with his height and weight. As of now, he has got a healthy body as he maintains his body a lot.

Our contents are created by fans, if you have any problems of Matt Dumba Net Worth, Salary, Relationship Status, Married Date, Age, Height, Ethnicity, Nationality, Weight, mail us at [email protected]