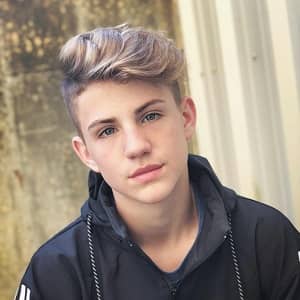 Matthew David Morris, better known as MattyBRaps is a popular American singer, songwriter, rapper, actor and dancer. He rose to fame through his Youtube channel, where he posts remix videos of popular music videos.

Matthew David Morris a.k.a. MattyBRaps was born on the 6th of January, 2003 in Atlanta, Georgia, the U.S. As of 2020, Matty’s age is 17. Matty is of American nationality and his ethnicity is Caucasian.

Matty’s mother is Tawny Morris and his father, Blake Morris, also acts as Matty’s manager. He was raised in his hometown of Atlanta along with his four siblings. His siblings include three brothers; Blake, John, Michael and Joshua; and a sister Sarah Grace. His cousin, MarsRaps is also close to him and acts as his producer.

He attended Wesleyan School. After that though, he hasn’t shared much on where he is studying.

How did MattyBRaps build his career?

MattyBRaps had an interest in music since the young age of five. He has stated that when he heard hip-hop for the first time he was inspired to learn to dance according to the beat. His interest in music was furthered when his cousin, Mars who was a popular rapper by the name of MarsRaps, moved in with his family.  M

ars helped Matty and the two uploaded Matty’s first video covering Justin Bieber’s song Eenie Meenie on YouTube. The video performed really well, reaching 500k views within a week. After this, he began gaining a lot more attention, and the 2012 music video of his song That’s the Way made him even more popular. This increased his confidence and he started releasing songs with original lyrics.

Soon after that, he was getting recognized by popular celebrities and even appeared on several Television shows as a guest artist. He had released a few original songs before but as his confidence grew, he started releasing many more of his original songs.

In 2015, he compiled his songs and released his debut EP titled Outside the Lines. As of 2020, he has uploaded more than 100 covers and about 50 original songs on his channel. His channel also has an impressive subscriber count of 13.7 million and has over 6 billion total views.

What is the net worth of MattyBRaps?

As of 2020, Matty has accumulated a net worth of approximately 7.5 million U.S. dollars. This figure is already pretty high, especially for a 17-year-old. But this is just the start of his career and he is sure to increase this number by a lot in the coming years. He has not revealed his annual salary.

What are the physical statistics of MattyBRaps?

MattyBRaps stands at a height of 5 feet 7 inches and weighs approximately 60 kilograms. He is blessed with good looks along with straight light brown hair and blue eyes.

Matty is currently single. He dated fellow student Kate Cadogan who is also a model and cheerleader in the past. Though there are rumors floating around that the two are together since they appear to be close. But, they have stated time and again that they are just good friends and not in a relationship.

Our contents are created by fans, if you have any problems of MattyBRaps Net Worth, Salary, Relationship Status, Married Date, Age, Height, Ethnicity, Nationality, Weight, mail us at [email protected]