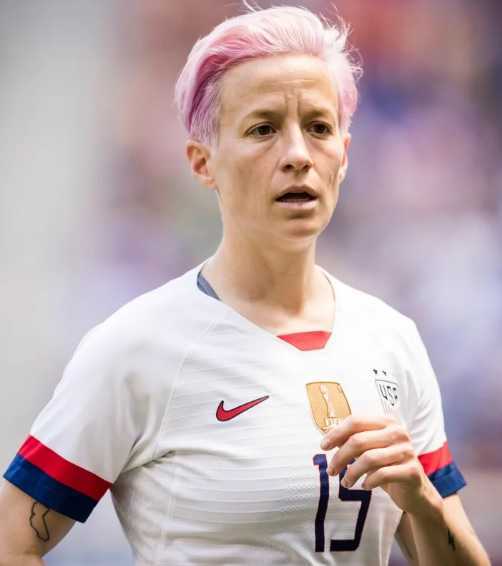 Honestly, I feel like we are a walking protest. The fact that we're women professional athletes says that in and of itself. We've been feeling the inequality

we've been struggling with pay equality or whatever it is, or sexism in sports

Over the years, I have really figured out what works for me. It's not about what anyone else is doing. I can't worry about whether I am doing everything that another player is doing, which can be hard sometimes. I have to trust my training and know my body and figure out what will get the best out of me

Megan Anna Rapinoe, professionally known as Megan Rapinoe is an American professional soccer player. She currently plays as a midfielder/winger for the Reign FC in the National Women’s Soccer League. She is also the captain of the club. She has previously played for Chicago Red Stars, Philadelphia Independence, MagicJack, Sydney FC, Seattle Sounders Women, and Olympique Lyon. She helped the United States women’s national soccer team to win gold at the 2012 London Olympics and 2015 FIFA Women’s World Cup. She co-captains the US Women’s national team since 2018. She is the recipient of ESPN’s 2011 ESPY Award for Best Play of the Year. She has over 540k followers on her Instagram.

What is Megan Rapinoe Famous For?

Where was Megan Rapinoe Born?

Megan Rapinoe was born on 5 July 1985. Her birth name is Megan Anna Rapinoe. She was born to a father, Jim Rapinoe, and a mother, Denise Rapinoe. Her birthplace is in Redding, California in the United States. She holds an American nationality. She has 5 siblings.

She played for the under-14 Northern California state Olympic Development Program (ODP) team in 1999 as well as the regional ODP team in 2002.

She played her youth career for the Elk Grove Pride club team from 2002 to 2005.

After high school, she and her fraternal twin sister, Rachael both attended the University of Portland in Portland, Oregon on full scholarships. She ranks tenth in the school’s history with an 88-point career including 30 goals and 28 assists. She forgoes her senior season at Portland to enter the Women’s Professional Soccer Draft.

The Chicago Red Stars selected her with the second overall pick in the 2009 WPS Draft.

She spent two seasons at Red Stars and was named to the league’s All-Star Team in 2009.

She signed with expansion team Philadelphia Independence in December 2010 after the Red Stars ceased operations.

She appeared in four games for the Philadelphia Independence. She was traded to magicJack.

She helped magicJack to advance to the championship final, where they were defeated by her former club Philadephia Independence by 2-0.

The WPS voted to terminate the magicJack franchise in October 2011. Rapinoe and many other players became free agents. The league suspended operations in early 2012.

She signed with Australian W-League team Sydney FC in October 2011 as a guest player for two games.

She signed with Seattle Sounders Women during the summer of 2012.

She signed with French club Olympique Lyonnais for six months in January 2013.

She made her UEFA Champions League debut during the first leg of the 2012-13 quarterfinal against FC Malmo on 20 March 2013.

She became the fifth American woman in history to play in a Champions League final when Lyon faced German side Vfl Wolfsburg on 23 May 2013. Lyon was defeated 1-0 in the final.

She scored 8 goals in 28 matches in all competitions for Lyon.

Despite only playing approximately half of the 2013 season (12 out of 22 regular-season games), she was the Reign’s leading scorer with five goals.

She scored her first professional hat-trick during the team’s first match against Western New York Flash of the 2015 season.

She previously played for the United States U16 and U19 national soccer teams.

She made her senior debut for the US women’s senior team in a friendly match against Ireland in July 2006.

She missed the 2007 FIFA Women’s World Cup and the 2008 Beijing Olympics due to separate ACL injuries.

In 2011 FIFA Women’s World Cup quarterfinals against Brazil, she provided the 122nd-minute assist that resulted in an equalizer goal. Eventually, Team USA defeated Brazil on a penalty shootout. The last-minute goal set a record for the latest goal ever scored in a match. For which, she was awarded ESPN’s 2011 ESPY Award for Best Play of the Year. Team USA finished as a runner-up in the competition behind Japan.

She held the Team USA to win a gold medal at the 2012 Olympic Games in London. They defeated Japan 2-1 in the final.

She is the first player, male or female to score a Goal Olimpico at the Olympic Games which she scored against Canada.

Rapinoe’s hometown of Redding honored her with a parade after the 2011 FIFA Women’s World Cup. Redding named 10 September as “Megan Rapinoe Day”.

2012 Board of Directors Award by the Los Angeles Gay and Lesbian Center for bringing awareness to LGBT people in sports.

Inducted into the Shasta County Sports Hall of Fame in December 2014.

Who is Megan Rapinoe Married to?

In July 2012 she was in a relationship with Australian soccer player Sarah Walsh. The couple dated each other for 5 years and ended their relationship in 2013.

She then dated Sub Pop recording artist Sera Cahoone. They got engaged in August 2015. However, their relationship ended in 2016.

She, along with 27 of her US Women’s soccer teammates filed a lawsuit against the United States Soccer Federation in March 2019 accusing it of gender discrimination, advocating for equal pay.

What are Megan Rapinoe Body Measurements?

Megan Rapinoe stands at a height of 1.7 m i.e. 5 feet and 7 inches tall. She has an athletic body build.

What is Megan Rapinoe Net Worth?

Our contents are created by fans, if you have any problems of Megan Rapinoe Net Worth, Salary, Relationship Status, Married Date, Age, Height, Ethnicity, Nationality, Weight, mail us at [email protected]