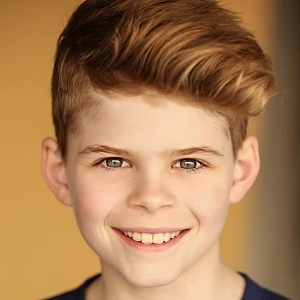 Merrick Hanna is a famous freestyle dancer from America. He is famous for his “flo-bot” style of dance. You may notice him on Nickelodeon’s “Lip Sync Battle Shorties”. Besides being a successful freestyle dancer, he is a popper, actor, and animator as well. The star started dancing at an early age of 9.

Merrick Hanna took birth on March 22, 2005, in San Diego, California, the United States, to parents Shawn Hanna and Aletha Hanna. As of 2020, his age is 15. He has a younger brother named Sagan Hanna. His family has always supported his efforts. His family support is very likely to lead him towards a successful career in freestyle dancing, acting, and modeling.
Talking about his educational background, his parents have suggested he keep his dancing practices and education on the same pace. He has a personal tutor who helps him catch up with school work when he is also busy with his glamour career.

How did Merrick start off his career?

At the age of 9, his grandmother influenced Merrick to take dance classes. And by the age of 10, one of his dance videos went viral, and he started drawing attention for his skills and performance. During his early days, he participated in ‘Lip Sync Battle Shorties’, which was an American reality television broadcasted on Nickelodeon. He then made an appearance on another dance competition show called ‘So You Think You Can Dance: The Next Generation’.
It wasn’t easy for Merrick to get into the ‘America’s Got Talent‘, as he couldn’t make it to the show on season 10 and season 11. However, he eventually made it to season 12. He received much appreciation from the judges on the show but was eliminated in the second week of the semifinals. Merrick has stepped on the career of acting by performing in summer Shakespeare runs of ‘Much Ado About Nothing’ and ‘A Winter’s Tale’.

What is the net worth of Merrick Hanna?

While there are no accurate details on his earning and net worth. He has a net worth of approximately $300k-350k. Most of his earnings are from his dance performances and acting career.

Is he dating anyone?

Hanna prefers to keep his personal life private and there is nothing on his relationship status or past relationships. However, he is most probably single as he is still on the very young side of his life. He is more focused on his acting and dancing career.

How tall is Merrick Hanna?

As a young boy, he seems very  Smart and looks Cute. He is very popular among youth. The young star stands at an average height of 5 feet and weighs about 57 kg. He got Average Build, has Blue eyes, and Blonde hair.

Merrick Hanna is very popular among youths. The star has won over thousands of people’s hearts with his cute smile and performances. He is hugely popular and active on Instagram with a fan following of 793 k followers under the username @merrickhanna. He is equally active on Tik Tok with over a million followers.
Moreover, his self-entitled YouTube has garnered 355k subscribers by uploading videos containing feature dances and tutorials.

Our contents are created by fans, if you have any problems of Merrick Hanna Net Worth, Salary, Relationship Status, Married Date, Age, Height, Ethnicity, Nationality, Weight, mail us at [email protected]