Michael Rubens Bloomberg is an American businessman, politician, philanthropist, and author. He is the majority owner and co-founder of Bloomberg L.P. 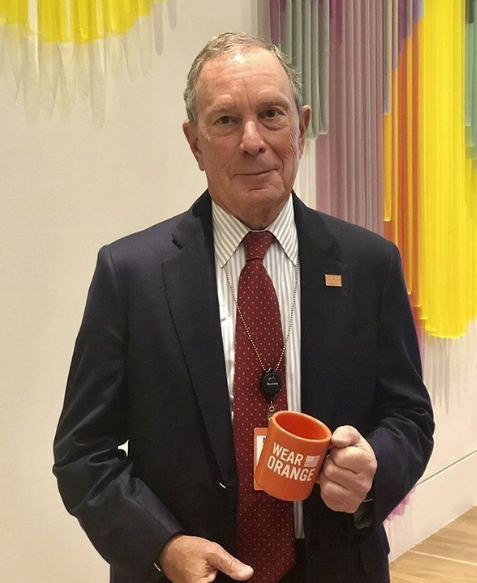 Being an entrepreneur isn't really about starting a business. It's a way of looking at the world: seeing opportunity where others see obstacles, taking risks when others take refuge.

If you don't encounter setbacks in your career, if you don't have doubts and disappointments , let me tell you, you're not dreaming big enough.

Don't be afraid to assert yourself, have confidence in your abilities and don't let the bastards get you down.

Michael Bloomberg is an American businessman, politician, author, and philanthropist who is ranked to be the 9th richest person in the United States and the 14th richest person in the world as in 2019. Bloomberg is co-founder, CEO, and owner of billion worth company, “Bloomberg L.P.”. Bloomberg also served as the 108th Mayor of New York City for three consecutive years in 2001. On November 7th, 2019, Bloomberg announced to run in the 2020 presidential race but not in 2019.

What is Michael Bloomberg Famous for?

Where is Michael Bloomberg From?

Michael Bloomberg was born on February 14, 1942, in Brighton, Massachusetts, United States. His birth name is Michael Rubens Bloomberg. Bloomberg belongs to White ethnicity while Aquarius is his zodiac sign.

Michael was born to a Jewish family to William Henry Bloomberg(father) and Charlotte Bloomberg(mother). His father was the son of Alexander Bloomberg who was an immigrant from Russia while his mother was the daughter of Max Rubens who was an immigrant of Belarus. William worked as an accountant for a dairy company while Charlotte was a housewife. Bloomberg family lived in Allston but when Michael was 2, they moved to Brookline after which they settled in Moston,  Medford, Massachusetts.

Michael was raised along with his younger sister, Marjorie Tiven. Tiven is currently the Commissioner of the New York City Commission for the United Nations, Consular Corps, and Protocol, holding the post since February 2002.

Bloomberg attended Hebrew school and then Johns Hopkins University, where he joined the fraternity Phi Kappa Psi. As a sophomore, he constructed the school mascot’s (the blue jay’s) costume. In 1964, he graduated from the university with a Bachelor of Science degree in electrical engineering. Two years later, in 1966, he graduated from Harvard Business School with a Master of Business Administration.

Besides, he is an Eagle Scout and is a prominent member of the Emanu-El Temple in Manhattan.

Who is Michael Bloomberg Married to? How Many Children Does he have?

Michael Bloomberg was previously married to Susan Elizabeth Barbara Brown, a British national from Yorkshire, United Kingdom. Brown and Bloomberg got married in 1975. They together have two daughters: Emma (born. 1979) and Georgina (born 1983). Emma and Georgina were featured in a documentary film, “Born Rich”.

Living for almost 18 years together, the couple soon divorced in 1993. Michael Bloomberg and his daughters own houses in Bermuda and they stay there frequently. Currently, he is a relationship with Diana Taylor. Taylor is a former New York state banking superintendent.

What is the net worth of Michael Bloomberg? How did he become a Billionaire?

The 77 years old, Michael Bloomberg is a billionaire man who has a great earning through his professional career as a businessman and politician. Bloomberg has managed to amass a great fortune of the amount in billion dollars through his company, “Bloomberg L.P.”. The profit of the company is worth billion dollars each year thus raising his income more and more.

By the year 2014, Bloomberg already had owned 14 properties in various countries around the world which include a mansion built in the Georgian style and historical property in London.  With all the fortune in multi-billion dollars, he has managed to live a lavish and luxurious lifestyle.

How Tall is Michael Bloomberg?

Michael Bloomberg has a well-maintained fit body physique. Being 77 years old, Bloomberg hasn’t let his age to overcome his power and mental stability. He stands tall with a height of 5ft. 8inch.(1.73m) while his body weighs around 64kg(142 lbs). He has a fair complexion with white hair and brown eyes.

Our contents are created by fans, if you have any problems of Michael Bloomberg Net Worth, Salary, Relationship Status, Married Date, Age, Height, Ethnicity, Nationality, Weight, mail us at [email protected]