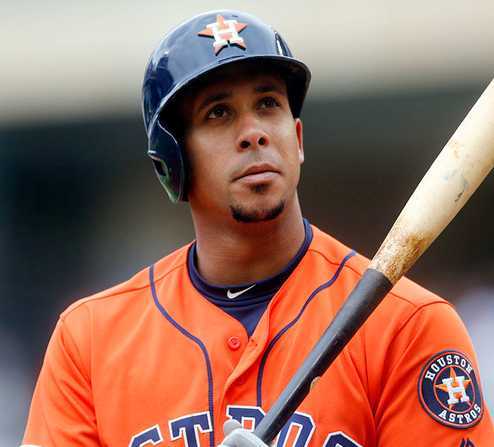 Michael Charles Brantley Jr., professionally known as Michael Brantley is an American professional baseball outfielder. He plays for the Houston Astros of Major League Baseball (MLB). Milwaukee Brewers selected him in the 2005 MLB Draft and made his MLB debut with Cleveland Indians in September 2009. He is the son of former MLB player and coach Mickey Brantley. He is the recipient of the 2014 Silver Slugger Award and has been named to MLB All-Star four times.

What is Michael Brantley famous For?

Where was Michael Brantley born?

Michael Brantley was born on 15 May 1987. His birth name is Michael Charles Brantley Jr. He was born to a father, Mickey Brantley. He grew up in Port St. Lucie, Florida. He started playing baseball at the age of 7, playing in Southwestern Port St. Lucie Little League Baseball.

Milwaukee Brewers selected Brantley in the seventh round with the 205th overall pick in the 2005 MLB Draft.

The Brewers then assigned him to the West Virginia Power of the Class A South Atlantic League in 2006.

He was promoted to the Huntsville Stars of the Class AA Southern League.

The Brewers traded Brantley to the Cleveland Indians in October 2008.

The Indians assigned Brantley to the Columbus Clippers of the Class AAA International League in 2009.

The Indians promoted Brantley to the major leagues in September 2019.

He was recalled to the team in August.

He had surgery on the hamate bone in his right hand in August 2011.

He had surgery to correct a sports hernia after the 2012 season.

He signed a four-year contract extension with Indians worth $25 million, with an option for a fifth season valued at $11 million and a $3.5 million signing bonus.

He won the Silver Slugger Award after the 2014 season.

He finished third for the 2014 American League Most Valuable Player Award.

He underwent shoulder surgery in the off-season.

He signed a two-year contract worth $32 million with the Houston Astros in December 2018.

Who is Michael Brantley Married to?

Michael Brantley is a married man. He is married to Melissa. The couple has two children together, Mariah, and Maxwell. He lives in Port St. Lucie, Florida during the baseball offseason.

How tall is Michael Brantley?

Michael Brantley stands at a height of 1.88 m. He has an average body build. He has a bodyweight of 91 kg.

What is Michael Brantley Net Worth?

Michael Brantley earns from his professional baseball career. His income comes from salary, bonuses, contracts, and endorsements. He signed with Houston Astros for $32 million. His annual salary is reported at $16 million. His net worth is not available at present.

Our contents are created by fans, if you have any problems of Michael Brantley Net Worth, Salary, Relationship Status, Married Date, Age, Height, Ethnicity, Nationality, Weight, mail us at [email protected]