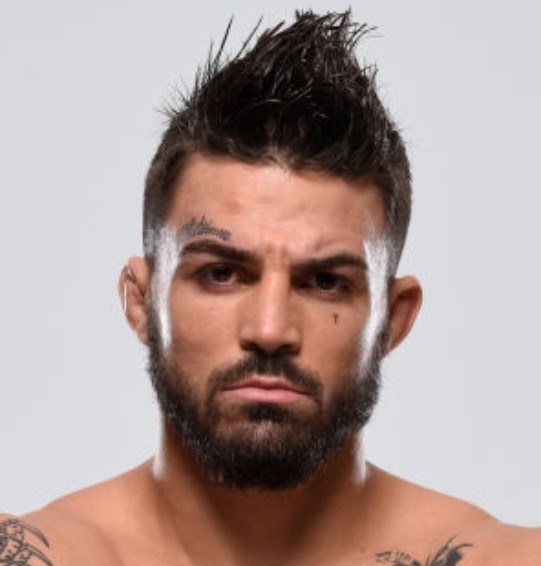 Mike Perry is an American professional Mixed Martial Artist (MMA), who is currently competing in the welterweight division of the Ultimate Fighting Championship(UFC). Perry began training at the age of 11 where he studied Muay Thai and became a Florida Champion. Making his first UfC appearance in August 2016, Perry has been awarded the Performance of the Night award and Fight of the Night award twice by the Ultimate Fighting Championship.

On June 27, 2020, Perry came out victorious at UFC on ESPN 12 after he beat Mickey Gall in the co-main event at UFC on ESPN: Poirier vs. Hooker. The win was an answer to all those trump cards who doubted him after which he got a huge number of supporters mainly for his decision to have his girlfriend as his corner woman.

Besides, he is quite active in social media sites with over 554k followers on his Instagram: @platinummikeperry.

What is Mike Perry Famous for?

Where was Mike Perry Born?

Mike Perry was born on September 15, 1991, in Flint, Michigan, United States. His birth name is Michael Joseph Perry. His nationality is American. Perry belongs to White ethnicity while Virgo is his zodiac sign.

Mike grew up with his father in the Navy in Apopka, Florida along with his two sisters and one brother. Perry had to move from Michigan to Florida during his childhood that the instability of his environment led him to a path of drugs, house arrest, probation violation, and jail.

He started training boxing at age 11, where he studied Muay Thai and became a Florida Champion which led to an MMA career.

Mike Perry was previously married to Danielle Nickerson. Nickerson is a beautiful athlete, a professional tennis player who came to about Mike after she made a call to a gym where he was a trainer at the time. They eventually met and dated for over 5 years until they got engaged on February 17, 2019. On September 8, 2019, the couple exchanged vows, however, their marriage didn’t last long.

Currently, Perry is in a relationship with his hot Mexican girlfriend, Latory Gonzalez. Perry announced his new girlfriend on March 31, 2020, with a challenge video on his Instagram. Gonzalez even appeared as a cornered woman on June 27, 2020, a match held between Perry and Mickey Gall.

Mike Perry has quite good earnings from his professional career as an MMA player. Having been in this field for years, Perry has managed to earn a healthy fortune from his several matches and deals. His net worth is estimated to be around $1.5 million.

How Tall is Mike Perry?

Mike Perry is a handsome strong bodybuilder in his late 20s. With a perfectly maintained athletic body physique and his martial techniques, Perry has managed to win several hearts all around the world. He stands tall with a height of 5ft. 10inch.(1.78m) while his body weighs around 78kg(171 lbs). He has a fair complexion with black hair and brown eyes.

Our contents are created by fans, if you have any problems of Mike Perry Net Worth, Salary, Relationship Status, Married Date, Age, Height, Ethnicity, Nationality, Weight, mail us at [email protected]