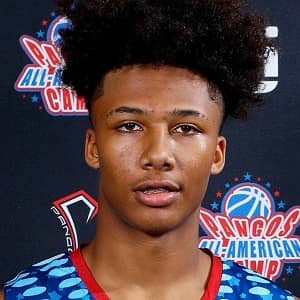 Mikey Willaims is an uprising American basketball player from San Diego, California. Williams was ranked as the top prospect in the nation for the class of 2023. Moreover, He is known for playing for the travel team Malcolm Thomas All-Star.

Where is Mikey Williams from?

Mikey Williams came into the world on the 26th of June, 2004 in San Diego, California. He is American by nationality and is currently 16 years old. His father’s name is Mahlon Williams and his mother’s name is Charisse Williams.

Moreover, Mikey has two siblings, a younger sister, and a younger brother. However, their names are not available in the media at the moment. He is of African- American ethnicity but his religion is not verified yet.

Regarding his educational background, Mikey Williams is currently attending San Ysidro High School in his hometown. He is a top basketball player at the school at the moment. And, he is currently playing Basketball for the High School.

How is the professional life of Mikey Williams?

Professionally speaking, Mikey Williams has acquired a lot in his career even though he is only 16 years old. He still has some years to go to get into the big leagues of professional basketball. Mikey started playing basketball from a very young age of 3 inspired by his Father. Mahlon Williams began mentoring him in basketball which made him improve dramatically.

Furthermore, Mikey played at his local YMCA and is deeply passionate about basketball. Since he was 10, his father saw his future in basketball sensing his dedication to it. Moreover, at the young age of 13, Mikey’s career kicked off by playing in Malcolm Thomas All-Star. Malcolm Thomas All-star is considered as one of the best teams in the nation. Furthermore, He also played alongside LeBron’s son LeBron James Jr and other nationally ranked young players as well.

Moreover, many professional players, as well as personalities, have praised him sensing that Mikey has a great future to become a great basketball player. Likewise, he was ranked as the top prospect of the NBA class of 2023 back in 2018. Mikey Williams is still one of the top recruits for the class of 2023.

How tall is Mikey Williams?

Looking at his physical appearance, Mikey is still a young person and is growing to his full potential. Currently, his height is of exactly 6 feet and weighs around 80kg. He has a very great athlete and muscular build for 16 years old. Moreover, Mikey is already tall which is preferable for basketball players. Furthermore, his body features black hair and a pair of dark brown eyes which brings him more charm in his personality.

How much net worth does Mikey Williams hold?

Talking about his income and net worth, Mikey has already earned a lot of money even in such a short basketball career. Moreover, because of his talents and hard work, his net worth is in the range of  $500k – $1 million.

However, there are no many details regarding his salary. But, it is sure that his net worth number is going to rise drastically in the coming years if he sticks to his basketball career.

Is Mikey dating anybody at the moment?

Referring to his dating life, Mikey Williams is currently in a relationship with Serenity Johnson. Serenity is a fellow basketball player.  Furthermore, he has not shared a lot about his relationship with Johnson. However, Duo regularly posts on social media sites with each other.

Furthermore, his past relationships are yet a mystery. However, it’s safe to say that a lot of girls are attracted to Mikey because of his attractive looks as well as his dedicated attitude. Mikey is still very young and hasn’t seen in any controversies news at the moment. Moreover, he is mainly focused on his career even at such a young age. Similarly, there are no rumors about him, and has kept his profile clean.

Socially, Mikey Williams is active on several social media platforms. His Instagram handle is @mikeytape and has over 22.4k followers on it as of 2020. However, he is not available on Twitter at the moment. Likewise, he has amassed a following of 3.4k people on his self-titled Facebook page.

Our contents are created by fans, if you have any problems of Mikey Williams Net Worth, Salary, Relationship Status, Married Date, Age, Height, Ethnicity, Nationality, Weight, mail us at [email protected]