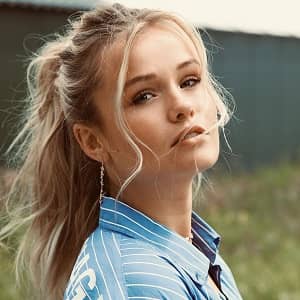 Mikky Kiemeney is a Dutch social media personality and a popular sports WAG. She is best known as the longtime girlfriend of FC Barcelona’s Dutch central midfielder, Frenkie de Jong.

How old is Mikky Kiemeney?

Mikky Kiemeney was born on April 17, 1998, in Hilvarenbeek, Netherlands. As of 2020, her age is 22. She was born to parents Marc Kiemeney (father) and Barbara Kiemeney (mother). She grew up in the Netherlands with her two brothers, Bing and Billy Kiemeney.

How did Mikky Kiemeney pursue her career?

Mikky Kiemeney is a social media personality and is famous as a WAG. However, she does have a career of her own too. She loved playing hockey at a young age. Kiemeney followed her passion and became a professional hockey player. In 2015, she made her professional hockey debut for HC Den Bosch’s women’s team. However, for some reason, she decided to quit and did not continue this path.

However, Kiemeney would soon be a subject of interest in social media after her pictures and relationship with Frenkie De Jong got public. Frenkie used to play for his home club, AFC Ajax in the Eredivisie at that time and Ajax’s incredible run to the semi-finals of the Champions League in 2019 put him in the spotlight. Moreover, the following season, his popularity increased even more after he transferred to FC Barcelona playing alongside the likes of Lionel Messi. Along with De Jong, his long-term girlfriend and also gained a lot of attention and followers. As of September 2020, her Instagram account has over 1.3 million followers.

In June 2018, the Dutch FHM named her the ‘Queen of the Wags’ in their top 500 poll. Mikky has now opened her own clothing and accessories brand called ‘Mikkyki’ which has started getting attention too.

How tall is Mikky?

Kiemeney stands at a height of 5 feet 4 inches. She has blonde hair and a pair of green eyes.

Mikky Kiemeney has been dating Dutch footballer, Frenkie De Jong, for a long time now. He plays as a central midfielder for FC Barcelona and the Dutch national football team.

They have known each other for a long time and have been in a relationship since their high school days. Since then, the couple has been together through thick and thin. Mikky is considered one of the most attractive ‘WAGs’ in world football and has gained attention from media and the fans for her looks.

What is the Net Worth of Mikky Kiemeney?

Mikky is active and popular on social media. She has over 1.3 million followers on Instagram.

Our contents are created by fans, if you have any problems of Mikky Kiemeney Net Worth, Salary, Relationship Status, Married Date, Age, Height, Ethnicity, Nationality, Weight, mail us at [email protected]