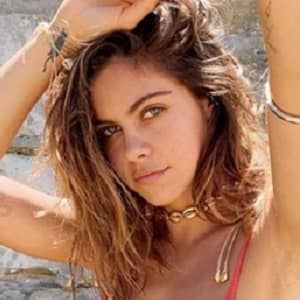 Mimi Elashiry is a fashion model, photographer, and dancer from Australia. She is mostly famous for her curvaceous figure, glamorous look, and her modeling for GQ, Teen Vogue, and different products companies, based in Australia.

Where is Mimi Elashiry from?

Mimi Elashiry was born on the 8th of October, 1995, in Australia as Ismeen Marlane Ashraf Elashiry. She is Australian by nationality and is currently 25 years old. Talking about her family background, she comes from a mixed ethnic group as her father is Egyptian, and her mother is Australian whose identities are yet unknown. Besides this, she has a younger sister whose name is Farrah. During her childhood, she trained ballet at The Ballet Class Rose Bay. However, there is information available about her educational background or the institute she attended.

How did Mini Elashiry found her stardom?

Mimi Elashiry started her modeling career on a campaign for the Lenni fashion label. According to her statement, she faced a lot of rejection during the initial days. It was because of her height 5’6, she was considered too short for a model. However, she did overcame all that and now she handles both of her dance and modeling careers. She is an emerging star on Instagram as well with the amazing shots that she takes herself and has an Instagram account for her photography titled “35 mimi meter“.

Aside from her modeling career, she was a dancer as well who received a letter of acceptance into Joffrey ballet school in New York. Unfortunately, she had to stop dancing as she got into a back injury. As of now, she visits Edge Performing Arts in Los Angeles where she takes ballet and Millenium Dance complex or Debbie Reynolds Studio where she takes hip-hop classes.

Additionally, Mimi has a collaboration clothing line with Paul Kaufman called Pskaufman that offers different types of boots. Likewise, Mimi has participated in several campaigns for brands such as Adidas Australia, MDM dancewear, Bonds, MG motor Australia, Shop bop, and many others.

How tall is Mimi Elashiry?

As a 25-year-old model, Mimi Elashiry has come a long way in becoming a fashion model. She stands at a height of 5 feet 6 inches and weighs about 55 kilograms. Looking at her social media posts, she radiates picture-perfect health and a pretty slim fit physique. Likewise, her physique measures at 34-26-34 inches to chest-waist-hip size, and she mentions wearing a shoe size and bra size of 7(US) and 32D respectively. Moreover, she has blonde hair and a pair of beautiful hazel eyes.

Moving up the ladders in the world of glamour, Mimi is associated with top brand companies like Calvin Klein, Victoria’s Secret, Gap. This justifies how she has built a fortune and career out of her work as a model. According to several media reports, Mimi’s net worth is growing significantly over the past few years. As of now, she has an estimated net worth of $200K-$600K. She even makes her additional earning through several brand endorsements, sponsors, and her own merchandise line.

Referring to the dating life of Mimi Elashiry, she is currently in a romantic relationship with her boyfriend, Nick Tsindos. As per several sources, the two are seen to have a really serious relationship and she is also seen celebrating boyfriend’s debut exhibition ‘Cope’ in Sydney. Before this, Nick has already been married to Jodhi Meares (m. 2016–2017). During the past, Mimi was linked with Adin Taylor but seems like they have parted away due to personal reasons.

Our contents are created by fans, if you have any problems of Mimi Elashiry Net Worth, Salary, Relationship Status, Married Date, Age, Height, Ethnicity, Nationality, Weight, mail us at [email protected]