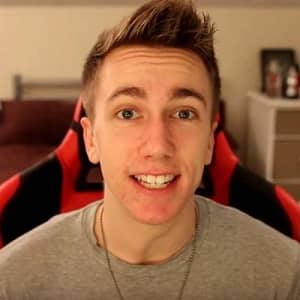 Miniminter is a popular English Youtuber. His videos are immensely popular and gain millions of views. Along with his popularity as a Youtuber, Miniminter is also part of the Youtube group, Sidemen.

When was Miniminter born?

Miniminter; real name Simon Minter; was born on the 7th of September, 1992 in the United Kingdom. As of 2020, his age is 28. His nationality is English and his ethnicity is Caucasian.

Miniminter has not revealed much about his parents and as such, even their names are not known. However, we do know that he was raised in the U.K. along with his brothers, Nick and Johnny. He also stated that he had an interest in pursuing his career as a YouTuber since he was young.

As for his education, Miniminter attended Berkhamsted School, which is a private school in his area. Then, for further education, he joined the University of Hull, where he studied criminology.

How did Miniminter build his career?

Miniminter actually started his Youtube career very early. He created his channel Miniminter back in 2008 and started uploading videos on his channel since the 7th of December, 2012. In the beginning, his content was mostly based around commentary on the Fifa games and football challenges. Nowadays though, his content has gotten much more diverse. He still does football challenges but also reaction videos, vlog-type videos, and other challenge videos.

He also has a 2nd channel, MM7Games, where he plays any games that are requested by his viewers. His sense of humor, energy, and likable personality have earned him millions of subscribers over the years.

Along with his individual popularity as a Youtuber, he is also part of the English Youtuber group, Sidemen. The group consists of popular Youtubers KSI, Zaerkaa, TBJZL, Benzinga, Vikkstar123, and W2S along with Miniminter. As a group, they release songs together and collaborate frequently on each other’s channels.

What is Miniminter’s net worth?

As of 2020, Miniminter has an estimated net worth of approximately 16 million U.S. dollars. He has not revealed his annual salary as of yet.

What are the physical statistics of Miniminter?

Miniminter stands at a height of 5 feet 10 inches and weighs approximately 75 kilograms. He has a fit physique along with brown hair and brown eyes.

Who is Miniminter dating?

Miniminter is currently in a relationship with singer/songwriter Talia Mar. They began dating in 2017 and though they broke up once, they patched it up and are currently dating. Talia is also a Youtuber and releases a lot of her music videos on her channel. We can also constantly see Talia and Miniminter being featured on each other’s channels constantly.

Miniminter is active on Instagram and Twitter. He has a huge presence on all these sites thanks to his massive fan following. Because of his charisma and sense of humor, he has amassed over 3.8 million followers on Instagram and over 2.7 million followers on Twitter. There are also multiple accounts of Miniminter on Facebook but it’s unlikely that they are his official accounts as none are verified.

Our contents are created by fans, if you have any problems of Miniminter Net Worth, Salary, Relationship Status, Married Date, Age, Height, Ethnicity, Nationality, Weight, mail us at [email protected]