Willard Mitt Romney is an American politician, businessman, and former presidential candidate who has served as the junior United States senator from Utah since January 2019. 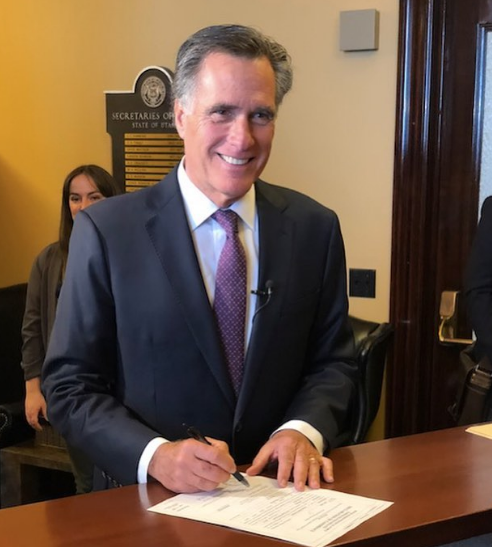 Leadership - leadership is about taking responsibility, not making excuses.

We reserve our deepest respect and admiration for those who volunteer for service and give their lives to help keep our nation secure.

The invisible hand of the market always moves faster and better than the heavy hand of government.

Mitt Romney is an American politician and businessman who currently serves as the Junior United States senator from Utah since January 2019. Romney also served as the 70th Governor of Massachusetts from 2003 to 2007. In 2012, Time magazine included Romney in their List of The 100 Most Influential People in the World. Recently, on October 21, 2019, Mitt Romney admitted having a secret Twitter account to defend himself from criticism.

What is Mitt Romney famous for?

When was Mitt Romney born?

Mitt Romney was born on March 12, 1947, in Detroit, Michigan, United States. His birth name is Willard Mitt Romney. American is his nationality. His zodiac sign is Pisces. White is his ethnicity.

He was born to George Romney(father) and Lenore Romney(mother). His parents were also a politician. He has a brother, Scott Romney and two sisters, Jane and Margo Lynn Romney. He was raised in Bloomfield Hills, Michigan along with his siblings. Since his childhood, he was interested in politics. He also had participated in political campaigns of his parents.

He did his schooling from Cranbook School. Later in 1971, he went to Brigham Young University where he earned a Bachelor of Arts in English. Later, he graduated from Harvard Law School with a law degree. In 1975, he attended Harvard Business School and graduated with a Business Administration degree. He also helped his parents in their political campaign.

Who is Mitt Romney married to?

The American politician, Mitt Romney is married to Ann Davies. Ann Davies is an equestrian, author, and philanthropist who had served as the First Lady of Massachusetts for four years(2003-2007). The couple tied the knot with each other in 1969. The couple is happy together and there are no rumors of their divorce.

The couple is blessed with five sons, Tagg, Matt, Josh, Ben, and Craig. Mitt is also the grandfather of David Milt and William Romney. At present, he is living in Michigan with his family. He is also active in social media with around 90k followers on Instagram.

How much is the net worth of Mitt Romney?

Romney’s previous company, “Bain Company” also had bought for $1 billion stakes in 1996 and sold months later for a profit of $700 million also, making a $1 billion profit after two years. Romney has about $31 million in cash, $500,000 worth of gold, and that less than a quarter of his financial assets from the firm, “Bain Company”.

With all the fortune in million dollars, Romney is living a lavish and luxurious lifestyle.

How Tall is Mitt Romney?

The 72 years old multi-millionaire politician, Mitt Romney has a maintained average body physique. Romney stands tall with a height of 6ft. 2inch. (1.88m) while his body weighs around 84kg(185 lbs). Romney has a fair complexion with grey hair and hazel eyes.

Our contents are created by fans, if you have any problems of Mitt Romney Net Worth, Salary, Relationship Status, Married Date, Age, Height, Ethnicity, Nationality, Weight, mail us at [email protected]