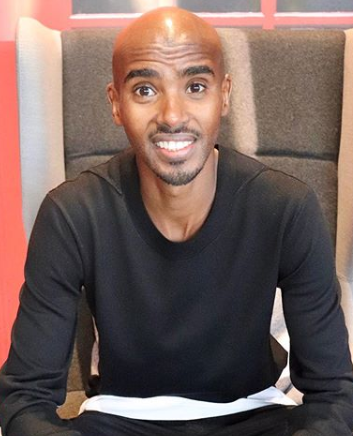 Mo Farah is a British distance runner who is the 2012 and 2016 Olympic gold medalist in both the 5000 m and 10,000 m. He is just the second athlete in modern Olympic Games history to successfully defend the 5000 m and 10,000 m titles; the first one was Lasse Virén. Though he mostly competes in the 5000 m and 10,000 m, he has also enjoyed considerable success in the 1500 m and the marathon. He also holds the British indoor record in the 3000 m and the current indoor world record for the two miles. Let’s explore more about him through this article.

What is Mo Farah famous for?

How old is Mo Farah?

Recalling his early life, Mo Farah was born in Mogadishu, Somalia in the year 1983. Currently, he aged 36 years old. He is one of the six children of Muktar, an IT consultant, and Amran Farah. His full name is Mohamed Muktar Jama Farah. Born in an Islamic family, he was a devout Muslim from the start.

The family had to migrate from Somalia due to increasing violence and disturbances in the country. They moved to the UK when he was eight years old. One of his brothers Hassan was left behind due to illness, and they remained separated for 12 years. He had trouble adjusting to his new environment for he barely could speak English.

Where did Mo Farah go to school?

For education, He went to the Isleworth & Syon School and later to the Feltham Community College.

In terms of his education, Mo Farah started training with Alan Storey in 2001 and won the European Athletics Junior Championship title in the 5000 m that year.

He became Britain’s second-fastest runner after Dave Moorcroft in 2006, clocking a time of 13 minutes 9.40 seconds for 5000 meters as a senior.

He also trained in Kenya and Ethiopia over the next few years, winning European titles in the 5000 m and 10,000 m in 2010. In 2011, he relocated to Portland, Oregon, to practice with American coach Alberto Salazar.

With a time of 3:28.81 at the Herculis meeting in Monaco in 2013, he broke the European 1500 m record. He essentially broke Steve Cram’s 28-year-old British record and Fermn Cacho’s 16-year-old European record with this achievement. He also won the 10,000 m and 5000 m events at the World Championships in Moscow the same year.

He was scheduled to participate in the 2014 Commonwealth Games in Glasgow, but he was forced to withdraw due to illness.

In 2015, he broke Kenenisa Bekele’s indoor two-mile world record by running an 8:03.4 at the Birmingham Indoor Grand Prix. At the age of 32, he went on to win the long-distance gold medal double at the 2015 World Championships in Athletics.

His incredible form continued at the 2016 Rio Olympics, where he won gold medals in the 10,000 m and 5000 m, becoming just the second competitor in modern Olympic Games history to successfully defend both the 5000 m and 10,000 m titles, following Lasse Virén.

After the 2017 World Championships in Athletics, he revealed that he would move from track events to the marathon. He won the 10,000m and finished second in the 5,000m behind Ethiopian Muktar Edris.

He won the inaugural London Big Half Marathon in March 2018, his first run in six months, in preparation for the London Marathon. In September of the same year, he won the Great North Run for the fifth time in a row, extending his streak.

He won his first gold medal in the marathon distance at the Chicago Marathon, setting a new European record of 2 hours 5 minutes and 11 seconds, an improvement of 37 seconds.

He revealed in February 2019 that he will run the London Major Half Marathon again in March 2019. He also claimed in an interview that he is considering participating in the Tokyo Olympics in 2020, which will be his fourth Olympic games if confirmed.

Who is Mo Farah’s wife?

Mo Farah is married to Tonia Nell, according to his personal life. They have three children together: twin daughters Aisha and Amani, as well as a son Hussein. He is also the stepfather of Rihanna, who is Tonia’s daughter from a previous marriage. Currently, the couple enjoys a happy life with their children, with no reports of divorce or separation.

What is Mo Farah’s net worth?

Mo Farah’s career as a distance runner earns him a fair amount of money and fame as a member of the sports industry. According to some online sources, his total net worth is reported to be $5 million. His compensation and properties, however, have yet to be revealed.

How tall is Mo Farah?

Observing his body physics, Farah stands a height of 5 feet 9 inches and weighs around 58 Kg. Similarly, he has an athletic with brown eyes and bade hair. His other body information is yet to be disclosed. In the case of disclosed, we will let you know.

Our contents are created by fans, if you have any problems of Mo Farah Net Worth, Salary, Relationship Status, Married Date, Age, Height, Ethnicity, Nationality, Weight, mail us at [email protected]