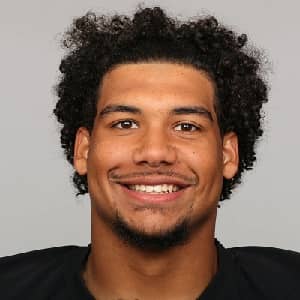 Mychal Rivera is a former American football player and holds the tight end position in the game. He is best known for playing with Oakland Raiders in the sixth round of the 2013 NFL Draft.

When was Mychal Rivera born?

He was born to his father, George Rivera, and mother, Yolanda Rivera, who is a former model. He has two sisters. His younger sister, Nickayla Rivera, is a runway model. His elder sister Naya Rivera was an actress as well as a good singer. Mychal also worked with her elder sister in the comedy-drama tv series, Glee.

Talking about his education, he joined Birmingham High School in Lake Balboa. He also used to play football for his high school team. After graduated from high school he enrolled at the University of Tennessee, Knoxville, Tennessee. Because he wants to join the College’s football team.

How did he pursue his American Football Career?

Mychal Rivera has always keenly interested in American football. He begins his career in his high school days. He joined the ‘Oregon Ducks Football’ team for the 2008 football season. Next year, he played for the College of the Canyons. In this season he catches 32 passes for 316 yards and 3 touchdowns. In 2010, he enrolled with Tennessee Volunteers and hold the tight end position.

He was very impressive in every match. Furthermore, he played altogether 13 games of the 2010 season. Similarly, he played 12 games in each season 2011 and 2012. Throughout this journey, he was named All-SEC by both CBSSPORTS and SEC coaches.

In 2013, He signed a contract with the Oakland Raiders, which is one of the professional American football team. He got a chance to play in the Sixth round of the 2013 NFL Draft. Overall he played 3 seasons by staying in this team. At the end of the 2016 season, he left the Oakland Raiders. The following year, in March, he accepts the offer of Jacksonville Jaguars. Then he started to play with the Jacksonville Jaguars.

Unfortunately, On September 1, 2017, his hand was injured and he was placed on injured reserve. However, his contract was declined by the jaguars and he left that club on February 20, 2018.

What is the net worth of Mychal Rivera?

Mychal is 6 feet 3 inches tall and weight is around 111 kgs. He has black hair and dark brown eyes.

Mychal is a married man. He married his lovely and beautiful girlfriend Siera Seward. First, they engaged in California. Later, he tied a knot with Siera, on June 18, 2016, in Marina del Rey, California. Mychal proposed to Siera, just the day before the marriage ceremony. Together, they have a son name, Ricci Rivera, who was born in 2017.

Our contents are created by fans, if you have any problems of Mychal Rivera Net Worth, Salary, Relationship Status, Married Date, Age, Height, Ethnicity, Nationality, Weight, mail us at [email protected]