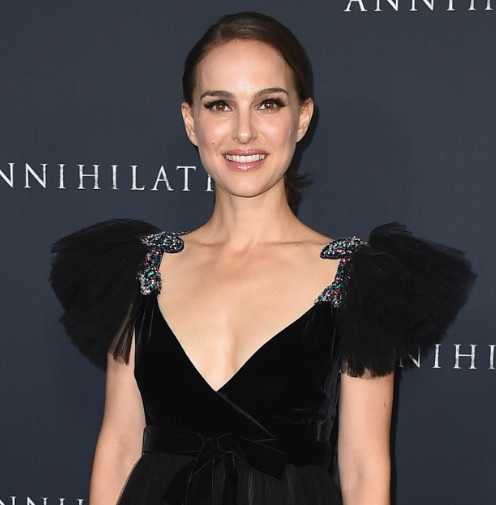 Cute is when a person's personality shines through their looks. Like in the way they walk, every time you see them you just want to run up and hug them

Awards are so unnecessary because I think we get so much out of our work just by doing it. The work is a reward in itself

Committing yourself to one person is sacred

Academy Award and Golden Globe Award winner, Natalie Portman is a well-known film actress, producer, writer, and director. Israeli born actress Portman has been able to mark her name in the list of Hollywood stars through her several hit movies: “Leon: The Professional”, “Star Wars”, and many others.

What is Natalie Portman Famous For?

– Portman is well-known for her aristocratic poise and nuance, along with her role of Queen Padme Amidala in the “Star Wars prequel trilogy”.

When was Natalie Portman born?

Natalie Portman was born on June 9, 1981, in Jerusalem, Israel. Her birth name is Neta-Lee Hershlag, which is a Hebrew name.

Natalie was born to a Jewish family. She is the only child of her parents: Shelley Stevens(mother)and Avner Hershlag(father).  Her mother is an American-born artist and a Portman agent while her father is an Israeli-born, fertility specialist and gynecologist.

Her parents met at a Jewish student center and got married a few years later in Israel.

How was Natalie Portman’s Early Life?

Natali Portman has dual citizenship of Israel and America. She is of Ashkenazi Jewish descent. Gemini is her zodiac sign.

While she was a toddler, Portman’s parents immigrated to the United States. They first lived in Washington D.C. and then settled in Long Island, New York.

Portman attended the “Solomon Schecter Day School”, a Jewish school in Jericho, New York, and learned to speak Hebrew.” Then she graduated from “Syosset High School”, New York in 1999. Further, in 2003, she gained a Bachelor of Arts(B.A.) degree in psychology from “Harvard University”.

Portman then headed to “The Hebrew University of Jerusalem”, where she took graduate courses.

In March 2006, she appeared at “Columbia University” as a guest lecturer. In addition to her degrees, Portman also took courses in Arabic, German, French and Japanese languages.

She attended the “Usdan Centre” for the Creative and Performing Arts in Wheatley Heights, and also took a course in ballet and modern dance at the American Theatre Dance Workshop.

How is Natalie Portman’s Career?

Natalie Portman had always an interest in Arts from her tender age and at age of the four, she was enrolled to dance classes a soon started to perform with local dance troupes. At the age of ten, she was offered to become a child model by a Revlon agent but she preferred acting instead.

In 1992, she auditioned for the off-Broadway show “Ruthless!” and was chosen alongside Britney Spears. In 1994, she made her first debut in the French thriller: “Leon: The Professional”, it was at this point that she took on the stage name “Portman”. Her performance in the movie brought her a number of other several roles.

She then appeared in “Everyone Says I Love You”, “Heat”, “Mars Attacks!” and “Beautiful Girls”. In 1997, she played the role of  Anne Frank in a Broadway adaptation of “The Diary of Anne Frank”.

It was not until 1999 that Natalie received worldwide fame as “Queen Amidala” in the highly anticipated US$431 million-grossing prequel “Star Wars: Episode I – The Phantom Menace”.

She then starred in two critically acclaimed comedy dramas, “Anywhere But Here” (1999) and “Where the Heart Is” (2000), followed by “Closer” (2004), for which she received an Oscar nomination.

In 2004, she appeared in “Garden Stae”, which earned her an Independent Spirit Award.

Portman was also in “Thor” and “Thor: The Dark World” as Jane Foster.

She also served as a producer in the movie adaptation of the novel: “Pride and Prejudice” and “Zombies”. She also played the role of U.S. first lady Jacqueline Kennedy, in a biographical drama named “Jackie”. This movie earned her a number of awards.

Career Highlights and Awards Of Portman

Portman has been honored with several awards and nominations for her work in acting:

– One BAFTA Award, and a SAG Award.

How is Natalie Portman in Personal Life?

Portman started dating ballet dancer Benjamin Millepied in 2009. The couple first met on the set of “Black Swan”. The couple announced their engagement in 2010 and on June 14, 2011, Portman gave birth to their first child,  Aleph Portman-Millepied.

Portman and Millepied got married in August 2012. Portman gave birth to their second child, daughter Amalia, on February 22, 2017.

Portman was rumored to be in a relationship with Moby in 2001 at the age of 18. She has been rumored to have dated: Jude, Lukas Haas, Hayden, Gael Bernal, Andy Samberg, Jake Gyllenhaal, Nathan Rothschild, Devendra Banhart, and Rodrigo Santoro.

As a philanthropist, Natalie Portman has delivered service for various needy causes. As an Ambassador of Hope for FINCA International, she financially helps supports women for taking on business endeavors in developing countries.

She’s a Democratic supporter as well and she is a follower of the vegan diet, yet consumed eggs and cheese during her pregnancy cravings. She also stands for animal rights by not wearing fur items of clothing.

What is the Net Worth of Natalie Portman?

Several award winner Portman has acquired most of her fortune from her acting and through the production of films. As of 2019, the estimated Net Worth of Nаtаlіе Portman is $60 million USD.

How Tall is Natalie Portman?

The beautiful actress Natalie Portman has a well maintained slim body. She stands at a height of 5 feet 3 inches. Her body weighs 50kg. She has fair complexion with light brown hair and light brown eyes.

Our contents are created by fans, if you have any problems of Natalie Portman Net Worth, Salary, Relationship Status, Married Date, Age, Height, Ethnicity, Nationality, Weight, mail us at [email protected]