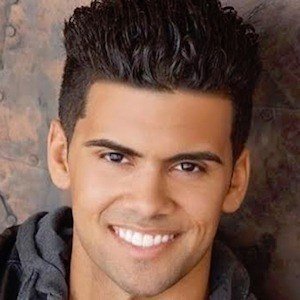 Nate Wyatt is a musician, actor, as well as TikTok star from America. Wyatt is widely famous for the creation of his videos on TikTok. He has even appeared in the movie Wrong Tutor as Eric and lately has released a song titled “Introduction“.

When was Nate Wyatt born?

Nate Wyatt was born in the United States on March 28, 1997. He hails from Cincinnati, Ohio. As of 2020, his age is 23 years old and his zodiac sign is Aries. Talking about the star’s family and personal life, he hasn’t shared much about his family including his parents and siblings.

However, he was raised by his Cuban mother whereas his father and grandmother left the family early when he was young. There is nothing on the internet about his parent’s and siblings’ names and professions.

Talking about his educational background, he completed his high school in Los Angeles and attended the University of Cincinnati where he got a chance to play on the football team.

In Earlier days, Nate Wyatt uploaded his first video on TikTok in March 2018. In the video he presented lip-sync and dance moves which were very attractive to the viewers. Viewers rated his acting skills as emotionally triggering. With such a number of views, his video went viral overnight. It was the year 2019, he joined The Hype House, a TikTok group of similar-minded people. Along with his solo-content, he soon stared collaboration with other fellow TikTok stars which boosted his fan followers even more.

Apart from TikTok, In 2018 he was seen in the series, Turnt. He appeared as the character Scott for 38 out of 39 episodes. Later in 2019, he appeared in the TV movie The Wrong Tutor as Eric. Apart from the Tik Tok and acting career, he is a singer as well. In 2018, he released the album Boys Meets World with songs like For You, With you, and Marathons. Currently, he released a new album, Introduction.

How tall is Nate Wyatt?

The TikTok star stands with a height of 5 feet 7 inches and a weight of about 58 kilograms. He is Smart, Cute, and. equally popular among youth. His body is mediumly  Muscular. Likewise, he has Black eyes and Black hair. His appearance features an oval-shaped face and a clean-shave look.

Is Nate in a relationship?

As of 2020, Nate Wyatt’s relationship status is most probably single. In the past, he has dated his fellow YouTube star, Aidette Cancino during the year 2018. The couple dated for about a year and went on their separate ways during the mid of 2019.

Currently speaking, Nate seems very focused on his career and his acting skills.

What is the Net Worth and Salary of Nate Wyatt?

Our contents are created by fans, if you have any problems of Nate Wyatt Net Worth, Salary, Relationship Status, Married Date, Age, Height, Ethnicity, Nationality, Weight, mail us at [email protected]