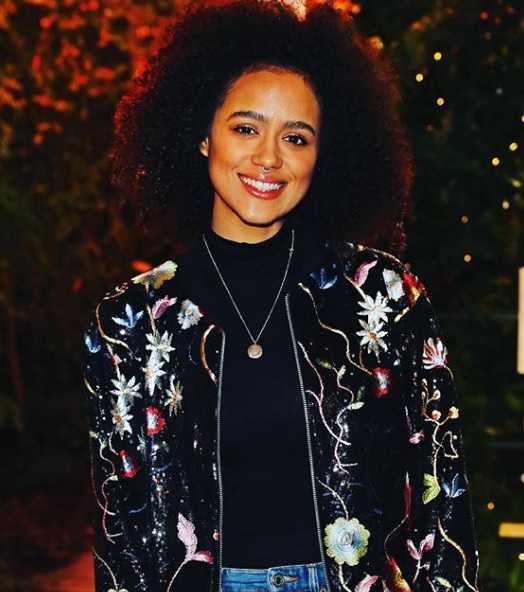 Nathalie Joanne Emmanuel, popularly known as Nathalie Emmanuel is an English actress. She rose to prominence for her role as Missandei in the HBO fantasy series, Game of Thrones. Her other major films are Maze Runner: The Scorch Trials, Furious 7, The Fate of the Furious, and Maze Runner: The Death Cure. She has over 4.4 million followers on her Instagram.

Game of Thrones, an HBO series notorious for systematically killing off famous and significant characters, has killed off another fan favorite, Missandei. Missandei, a former slave who was set free by Daenerys Targaryen, the mother of dragons, later works for Daenerys as an interpreter. Cersei later executes Missandei as she is being held captive by the queen of the Seven Kingdoms.

Nathalie Emmanuel Is Known For What?

– Her depiction of Missandei on HBO’s Game of Thrones.

Nathalie Emmanuel was born in which country?

On 2 March 1989, Nathalie Emmanuel was born. Nathalie Joanne Emmanuel is her given name. Her birthplace is in the English town of Southend-on-Sea. She is of English ancestry. Pisces is her zodiac sign. Her mother is a mix of Dominican and English heritage, while her father is a mix of Saint Lucian and English ancestry. Her parents’ names are uncertain. Louise Emmanuel is her older sister. At a very young age, she showed an interest in acting. At the age of ten, she played Young Nala in the West End production of The Lion King.

She was educated at St Hilda’s School and later at this all-girls school. She later attended Westcliff High School for Girls, where she completed her high school education.

Nathalie Emmanuel’s Career as an Actress

In 2006, she made her television debut as Sasha Valentine in Hollyoaks. She continued to appear on the show until 2010.

She was the host of BBC Three’s Websex: What’s the Big Deal? the month of January 2012.

In 2012, she made her feature film debut in the thriller Twenty8k.

In 2013, she was cast in HBO’s fantasy drama Game of Thrones as Missandei, Daenerys Targaryen’s translator. She was hired for the job while working as a shop assistant in a clothing store. She joined the show’s regular cast in 2015.

Her character, Missandei, was killed off in the fourth episode of Game of Thrones’ final season.

In 2015, she starred as computer hacker Ramsey in the action film Furious 7. In 2017, she returned to the part of Ramsey in The Fate of the Furious.

In 2015, she starred as Harriet in the sci-fi adventure Maze Runner: The Scorch Trials. In 2018, she returned to the part of Harriet in Mazer Runner: The Death Cure.

She received the Screen Nation award for Best Female Performance in a Motion Picture for her work on Furious 7.

She will lend her voice to the forthcoming Netflix series The Dark Crystal: Age of Resistance.

Who is Nathalie Emmanuel’s Husband or Boyfriend?

There is no detail about her marital status. It will be revised in the near future. She previously dated actor Devon Anderson.

How big is Nathalie Emmanuel?

How much money is Nathalie Emmanuel worth?

Nathalie Emmanuel makes a living as an actress. She has appeared in a number of high-profile films and television shows. Her primary source of revenue is her job in the film industry. As of 2019, her total net worth is $1 million.

Our contents are created by fans, if you have any problems of Nathalie Emmanuel Net Worth, Salary, Relationship Status, Married Date, Age, Height, Ethnicity, Nationality, Weight, mail us at [email protected]