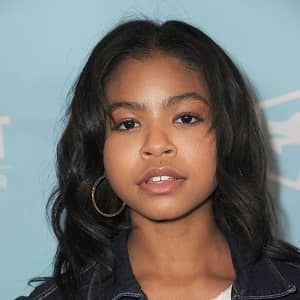 Navia Robinson is an American child actress. She is best-known for her portrayals of D’Asia on ‘Being Mary Jane’ and Nia in ‘Raven’s Home’.

How old is Navia Robinson?

Navia Robinson was born as Navia Ziraili Robinson on 4 May 2005, in Marietta, Georgia, USA. As of 2020, her age is 15. She was born to parents Jeffery Robinson (father) and Lisa Butler Robinson (mother). She grew up with her two brothers named Maz and Gianni Robinson.

How did Navia Robinson pursue her career?

Navia Robinson started her career in 2011 when she was just six years old. She participated in the national talent competition in the Christ “Shine Event” in Orlando, Florida where she won the Overall Top Child Model award. This immediately caught the attention of many agencies and she signed with New York agency Generation Model Management.

Following that, she modeled and featured in several commercials. From 2014 to 2015, she starred in ten episodes of the TV series, ‘Being Mary Jane’ portraying ‘D’Asia’.

After her talents got exposed to a wider audience, she caught the attention of Nicki Minaj who wanted her to play the role of her growing up in a documentary.

Moreover, she was also cast in the popular series, ‘The Vampire Diaries’ as Janie. Following that, she also featured in the Netflix series, ‘Free Rein’ as Rosie. She featured in 30 episodes of the series, ‘Raven’s Home’ as Nia Baxter-Carter. In 2019, she appeared as herself in an episode of ‘The Real’ and also as Valerie in ‘The Rocketeer’.

For her performances in ‘Free Rein’ and ‘Raven’s Home’, she has received nominations for the NAACP Image Award.

How tall is Navia?

Robinson stands at a height of 5 feet and weighs around 40 kgs. She has black hair and a pair of dark brown eyes.

What is the Net Worth of Navia Robinson?

As of 2020, Navia Robinson has an estimated net worth of around $300k. Her main source of income is acting. Still in her teenage years, the talented actress has made a name for herself and is expected to become more and more popular in the years to come.

Is Navia Robinson dating anyone?

As of 2020, Robinson is currently single. She has stayed private regarding her dating life and has not publicly confirmed dating anyone so far. There have been rumors about her dating Isaac Ryan Brown, her Raven’s Home co-star. However, both of them have only admitted to being close friends and have not confirmed anything about the speculation.

Our contents are created by fans, if you have any problems of Navia Robinson Net Worth, Salary, Relationship Status, Married Date, Age, Height, Ethnicity, Nationality, Weight, mail us at [email protected]