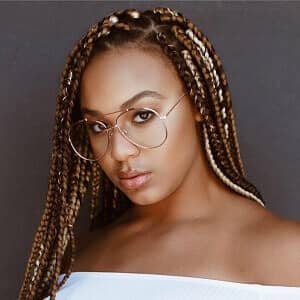 Nia Sioux is a young American dancer, singer, and actress. She first gained national attention for appearing in ‘Dance Moms’, making her debut in the show at the age of 10.

She later went on to establish herself as a singer with the release of her first single in 2015 and as an actress with the starring role of Emma Barber in ‘The Bold and the Beautiful’ and as Sonitas in the movie, The Code.

How old is Nia Sioux?

Nia Sioux was born as Nia Sioux Frazier on June 20, 2001, in Pittsburgh, Pennsylvania. As of 2020, her age is 19. She was born to parents Holly Frazier (mother) and Evan Frazier (father). She is one of their three children and has two brothers, Evan Frazier Jr. and William Frazier. His brother, Evan is a lacrosse and football player and features his skills in photos on his Instagram account. Moreover, her other brother, William is famous for his short comedy videos on his Instagram.

Sioux learned dancing at a young age of 3 and spent her childhood days in Pittsburgh, Pennsylvania, United States. In addition to this, he is also interested in playing the piano and drums. Her ethnicity is African-American.

How did Nia Sioux pursue a career in Dancing, Singing, and Acting?

Nia Sioux loved dancing from a very young age and started training in dancing since she was three years old as her parents were also very supportive and encouraged her to pursue her passion for dancing. Her favorite forms of dancing are contemporary and musical theatre. Sioux gained prominence at the age of 10 when she made her debut in the TV show, ‘Dance Moms’.

During her time on Dance Moms, Nia was often placed on the bottom of the pyramid because of which her mother often got into arguments with Abby.

Originally members of ALDC junior elite, both she and her mother remained permanent members until season 7 when they officially left the Abby Lee Dance Company. She was famous for her signature death drops, stage presence, determination to win, and displaying vast improvements in her technique.

In 2017, the same year she left Dance Moms, it was announced that her first independent feature film, ‘Summer Dance’ would be hitting the theaters in 2018. Nia portrayed the lead character, Jasmine in the movie. In the summer of 2016, she made her Off-Broadway debut in a New York production of Trip of Love. Moreover, she also stars as Emma Barber on the popular TV series, ‘The Bold and the Beautiful’ and as Sonitas in the movie, ‘The Code’.

In 2015, Nia made her recorded debut with the release of ‘Star in You Own Life’ and released a handful of independent singles through 2016. Her singles, ‘Slay’, ‘DJ Fav’, and ‘Here for You’ all became well-received.

Sioux joined Youtube in April 2015. Her videos have gained more than 75 million views and her self-titled channel has more than 1.08 million subscribers. Her most popular video is her first music video titled, ‘Star in Your Own Life’ which has over 13 million views.

How tall is Nia Sioux?

Sioux stands at a height of 5 feet 8 inches and weighs around 71 kg. She has black hair and a pair of brown eyes.

Does Nia Sioux have a boyfriend?

Nia Sioux is currently single. She was previously in a relationship with Bryce Xavier, a fellow dancer and social media personality. They had met in 2017 through dance and became friends. She revealed in an interview in 2018 that they are dating. However, they seem to have broken up for undisclosed reasons.

She started posting pictures with the social media star, Jake Clark on Instagram after which fans started assuming they were dating. However, these turned out to be just rumors as they have revealed they are each other’s ‘best friends’.

How much is Nia Sioux’s Net Worth?

As of 2020, Nia Sioux has an estimated net worth of around $1.5 million. Still in her teenage years, Sioux’s net worth is impressive. Her primary sources of income include acting, singing, dancing, and her Youtube channel. Her annual salary is estimated to be over $700k.

Our contents are created by fans, if you have any problems of Nia Sioux Net Worth, Salary, Relationship Status, Married Date, Age, Height, Ethnicity, Nationality, Weight, mail us at [email protected]